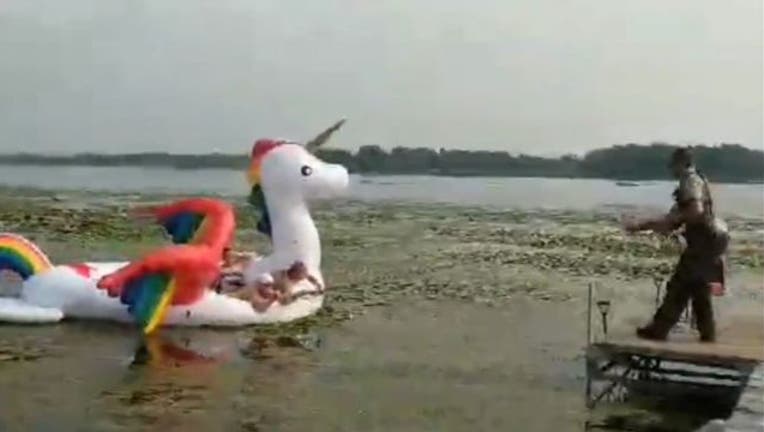 A group of women on an inflatable rainbow unicorn were rescued by police after they got stuck in the weeds on a Minnesota lake. (Chisago Co. Sheriff's Office)

(FoxNews.com) - Authorities in Minnesota made an unlikely rescue on Saturday when they came across a group of women who were stranded on a lake clinging to an inflatable rainbow unicorn.

The Chisago County Sheriff's Office said on Twitter that officers were driving along the Fish Lake, near Stark, Minn., when they came across the women on the large unicorn.

The two officers initially wanted a photo, but later realized the group was stuck in the lake's thick weeds, according to FOX9.

As one deputy filmed, another grabbed a rope to throw and eventually pulled in the stranded women.

"With a handful of laughs and some mad rescue roping skills they were pulled back to the dock!" the sheriff's office said on Twitter.

The agency said in a subsequent post that the rescue of the unicorn showed they were an "equal opportunity help provider."