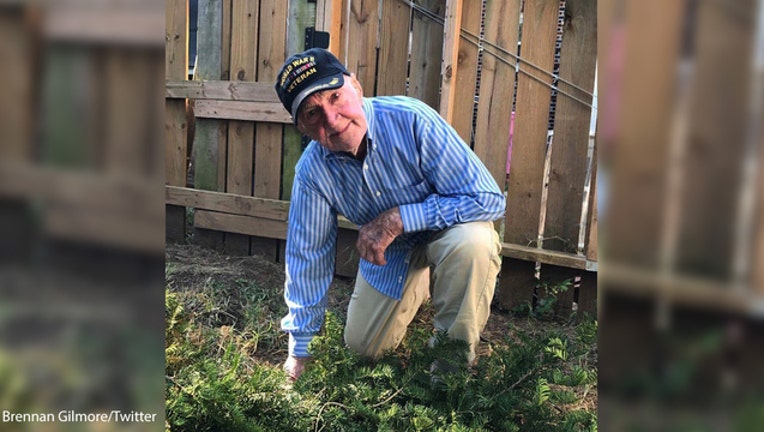 SPRINGFIELD, Mo. - A 97-year-old World War II veteran has gone viral after he showed his support for the #TakeAKnee movement.

Brennan Gilmore posted the photo of his grandpa donning his World War II veteran hat while taking a knee with the caption: “My grandpa is a 97-year-old WWII vet & Missouri farmer who wanted to join w/ those who #TakeaKnee: ‘those kids have every right to protest.’”

The Springfield News-Leader reports the veteran is John Middlemas of Willard, Missouri.

"I'm trying to say that you have to love everybody," Middlemas told the Springfield News-Leader. "We don't kill people. We want to make people live."

“Grandpa has been an ally to the civil rights movement for many years. He's an amazing man always on the side of justice,” Gilmore tweeted.

The #TakeAKnee movement began with quarterback Colin Kaepernick, who said he was kneeling during the national anthem to protest police brutality and racial injustice.

The movement grew exponentially after President Donald Trump spoke out against the movement. On Sunday, more than 200 players in the NFL were seen kneeling or sitting during the national anthem.

On Monday, President Trump tweeted his reaction to the protests by NFL players on Sunday, saying the issue has nothing to do with race, and rather that "it is about respect for our Country, Flag, and National Anthem. NFL must respect this!"