CHICAGO - Alex DeBrincat scored 1:27 into overtime and the Chicago Blackhawks overcame an early two-goal deficit to beat the St. Louis Blues 3-2 on Friday.

DeBrincat beat Jordan Binnington for his 12th goal with a one-timer from the left side of the crease after taking a cross-ice feed from Patrick Kane on a 2-on-1 break.

"To be a good team, you’ve got to win those games," DeBrincat said. "Even when you’re down, you’ve got to come back to find a way and I think that’s what we did tonight. Hopefully, we can build on that."

Chicago started the season 1-9-2 and was all-but unresponsive under Jeremy Colliton. King took over Nov. 6.

"Earlier in the season, we were down 2-0 and it’s probably over," DeBrincat said. "But I think we had a good reset there in the (first) intermission and came out and played strong."

Brandon Hagel scored for the third straight game — on a deflection with 5:04 left in the third — to tie it at 2. At the edge of the crease, Hagel redirected Seth Jones’ shot from the point past Binnington.

The Blackhawks outshot the Blues 10-2 in the third and patiently took charge of the game.

"We talked about it earlier, about the confidence these guys are building every game, the ups and downs," King said. "I thought the second and third for us was the best we’ve played — just simple hockey and just stuck with the program."

And the Blues were down a forward after David Perron left with an upper-body injury in the first period and didn’t return.

"It seemed like we didn’t have much in the tank," St. Louis coach Craig Berube said. "I think we ran out of energy."

Jujhar Khaira also scored in regulation for Chicago, which got 23 saves from Kevin Lankinen and two assists from Jones. 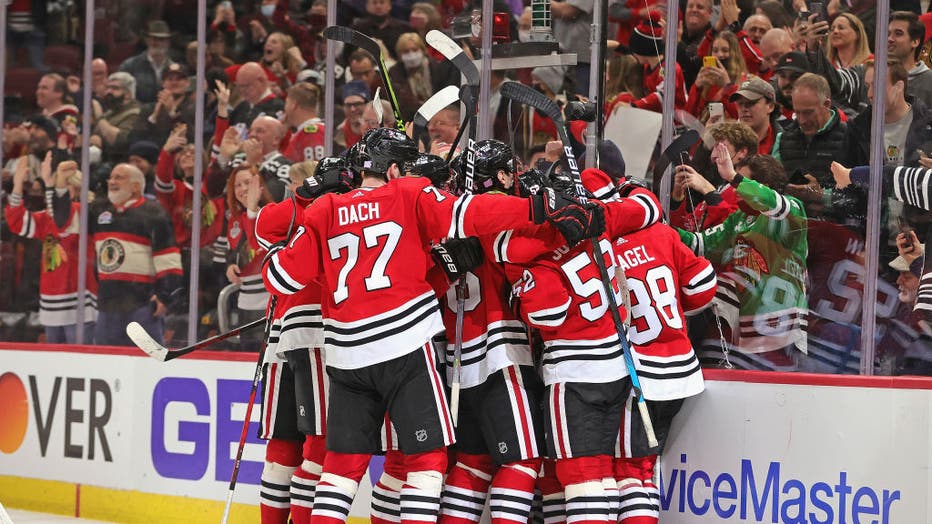 Members of the Chicago Blackhawks celebrate a win over the St. Louis Blues at the United Center on November 26, 2021 in Chicago, Illinois. The Blackhawks defeated the Blues 3-2 in overtime. (Photo by Jonathan Daniel/Getty Images)

Pavel Buchnevich and Ivan Barbashev scored in the first period for St. Louis. Binnington made 24 saves as the Blues slipped to 2-5-2 in their last nine.

The Blackhawks beat the Blues for the first time since April 3, 2019.

The Blues edged Chicago 1-0 at St. Louis behind Binnington on Oct. 30. The two teams met only four times in the pandemic-shortened 2019-20 season and didn’t face each other in 2020-21 when the NHL juggled it divisions for a 56-game campaign.

Buchnevich opened the scoring 59 seconds into the first, completing a 3-on-1 break after Jones got caught up ice. Buchnevich fired in his second goal in two goal games into an open net after taking Jordan Kyrou’s cross-ice feed.

Barbashev’s power-play goal with 3:21 left in the first made it 2-0. After Robert Thomas’ centering pass hit his a skate, Barbashev popped a loose puck from just outside the crease past a screened Lankinen.

Khaira cut it to 2-1 34 seconds into the second period, batting in a rebound of Mike Hardman’s shot from midair.

Binnington made a glove save on Hardman’s close-in attempt, but the goalie flipped the puck straight up. At the goal line, Khaira waited for the puck to drop below the crossbar, then tapped it in.

NOTES: Blackhawks captain Jonathan Toews remained without a goal in his first 20 games this season after his apparent tying score 4:30 into the first period was disallowed following a video review. Toews fired a loose puck into an empty net after it rolled off the heel of Binnington’s stick behind the net, but linemate Patrick Kane was ruled offside entering the zone on the play… The Blackhawks placed F Adam Gaudette on waivers Friday. The 25-year-old has a goal and an assist in eight games. King said there just wasn’t room or Gaudette in the lineup …. St. Louis veteran F James Neal missed his second straight game after "tweaking" something in pracrice on Wednesday, Berube said. … Blackhawks D Wyatt Kalynuk played his first game this season. Chicago F Dylan Strome and D Caleb Jones were a healthy scratches.