Allen had a 96-yard touchdown scamper for the longest run from scrimmage in program history and Torchio had the school’s longest interception return as the 18th-ranked Badgers trounced Championship Subdivision program Illinois State 38-0 on Saturday night.

"You guys saw it tonight," said Allen, who rushed for 148 yards and two touchdowns on 14 carries. "Not even just on the offense. We had the longest interception return for a touchdown as well. I think both sides of the ball have explosive playmakers." 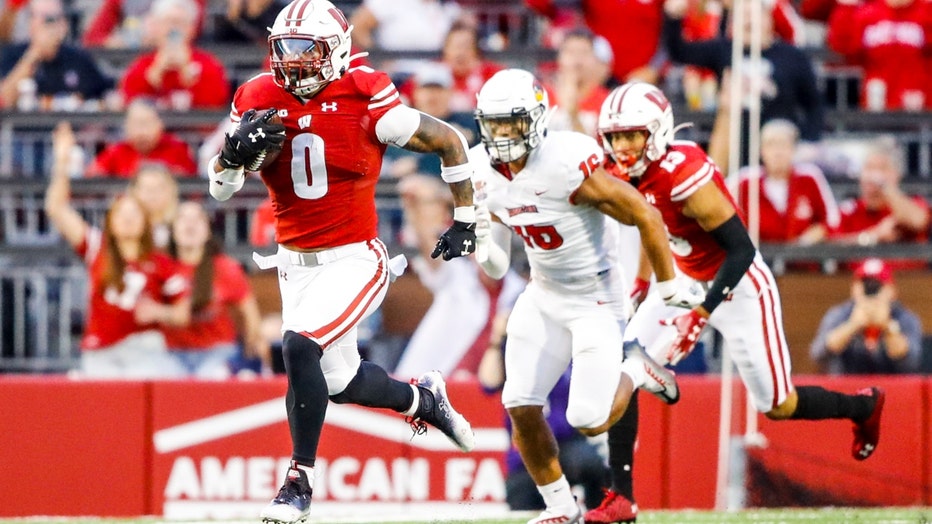 Wisconsin running back Braelon Allen (0) heads off on a 96 uard touchdown run during a college football game between the University of Wisconsin Badgers and the Illinois State University Redbirds on September 3, 2022 at Camp Randall Stadium in Madiso (Lawrence Iles/Icon Sportswire via Getty Images / Getty Images)

Torchio opened the scoring with a 100-yard interception return late in the first quarter after Illinois State had reached the red zone.

According to outside linebacker Nick Herbig, Torchio predicted the interception before the ball was snapped.

"I’m getting lined up, and Torch says, ’Hey, Herbie, I’m about to pick this one," said Herbig, who had two of Wisconsin’s four sacks. "I’m like, ‘All right.’ So I’m pass rushing, and I turn around and sure enough, there’s Torch with the ball in his hand. He’s called the ‘Jewelry Thief’ for a reason."

Torchio broke the record previously held by Joe Ferguson, who scored on a 99-yard interception return in a 59-10 victory over Utah State in 2017. Wisconsin’s longest run from scrimmage before Allen’s breakaway was James White’s 93-yard burst in a 51-3 triumph over Indiana in 2013.

Illinois State was facing a Big Ten team for the first time since 2016, when the Redbirds won 9-7 at Northwestern on a field goal as time expired.

But the Badgers took the suspense out of this one early.

Illinois State lost its main weapon on offense when running back Cole Mueller was carted off the field on the Redbirds’ second series with an injured left leg. Mueller rushed for a team-high 977 yards last season.

"It’s pretty serious," Illinois State coach Brock Spack said. "We’ll obviously see when we get home, but he’s in a cast right now and I don’t think it looks good for this year anyways."

The Redbirds did make things interesting for a little while.

Illinois State outgained Wisconsin 78-6 and possessed the ball for over 13 ½ minutes in the first quarter, but still trailed 7-0 because of Torchio’s interception.

The Redbirds faced second-and-10 from the 12 when Minnesota transfer Zack Annexstad attempted to throw across the middle to tight end Tanner Taula, who was standing around the goal line.

Torchio picked off the pass, headed to his right and capitalized on downfield blocks from teammates Max Lofy and Hunter Wohler to make it to the other end zone.

"He forced a ball in where it shouldn’t have gone," Spack said. "That’s what you learn in a game like this. You make that kind of mistake, a great player on a good football team can turn it into 100 yards the other way."

The Badgers produced their next record-setting play 90 seconds into the second quarter.

Wisconsin had first-and-14 at its own 4 when Allen took a handoff and looked for running room. Illinois State outside linebacker Zeke Vandenburgh had his hands on Allen in the backfield, but the 18-year-old sophomore broke out of his grasp and found a huge hole on the right side of the line.

"I ran into somebody, bounced off him and there was nobody left," Allen said.

Cornerback Franky West tried to chase the ball carrier down and made a diving attempt at an ankle tackle inside the 10, but Allen made it into the right corner of the end zone.

Wisconsin had one other big play aside from the two record-setting touchdowns.

Chimere Dike caught a pass around the line of scrimmage and turned it into a 74-yard gain, the longest completion of third-year starter Graham Mertz’s career. Mertz found Dike all alone in the left corner of the end zone three plays later for a 16-yard touchdown.

This marked the first time a Bowl Subdivision team had a run, pass completion and interception return of at least 70 yards in the same game since Middle Tennessee did it in a 51-17 victory over Old Dominion in 2018. No Big Ten team had done it since 2003.

Illinois State: Annexstad went 16 of 24 for 186 yards but also threw two interceptions. The Redbirds could have trouble running the ball as long as Mueller is out. Mueller ran three times for 21 yards before his injury. The rest of Illinois State’s players combined for 36 yards on 23 carries.

Wisconsin: The most encouraging sign for the Badgers was the efficient performance of Mertz, who threw more interceptions (11) than touchdown passes (10) last season.

A victory over an FCS team likely won’t move Wisconsin up more than one or two spots.