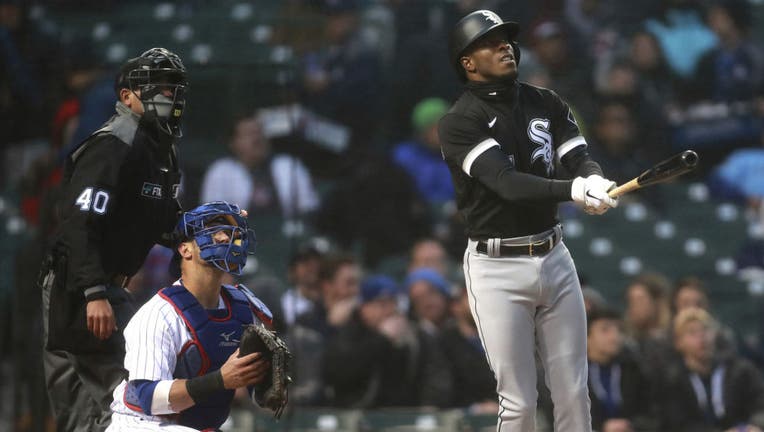 The Chicago White Sox&apos; Tim Anderson hits a solo home run in the third inning against the Chicago Cubs at Wrigley Field on Tuesday, May 3, 2022, in Chicago. (Chris Sweda/Chicago Tribune/Tribune News Service via Getty Images)

Looking to dig themselves out of a rough start, the banged-up White Sox won for the third time in four games. Michael Kopech pitched four-plus scoreless innings, and Jake Burger had two hits.

Anderson led off the third with a drive to right-center on Keegan Thompson’s first pitch of the inning, making it 3-0 with his fourth homer. The dynamic shortstop is batting .359 (14 for 39) in his last 10 games.

The Cubs went with a bullpen day after they placed left-hander Drew Smyly on the bereavement list before their first meeting of the season with their crosstown rivals. Scott Effross (0-1) got four outs in his first big league start, allowing two unearned runs and two hits.

The North Siders put runners on first and second in the third, but Abreu grabbed Seiya Suzuki’s liner and scrambled over to first for the inning-ending double play. The big first baseman started another slick double play in the fifth.

The White Sox threatened in the top of the fifth, loading the bases with one out, but Abreu bounced into a double play that featured a strong turn by Cubs second baseman Nick Madrigal.

Nico Hoerner got the Cubs on the board with an RBI double in the sixth. Yan Gomes then struck out swinging against José Ruiz, stranding runners at second and third.

Reynaldo López (3-0), the first of five White Sox relievers, pitched a scoreless inning for the win. Liam Hendriks got three outs for his sixth save in seven chances.

White Sox: Burger banged his left knee into the short wall along the line while chasing a foul ball in the third. After testing his legs with a few short sprints, the third baseman stayed in the game. ... OF Andrew Vaughn (right hand/wrist) missed his fourth straight game after he was hit by a pitch on Friday. "He’s getting better, but it’s the kind of thing where if he tries to swing sore, might do something unnatural and make it sore," manager Tony La Russa said.

Cubs: C Willson Contreras was out of the starting lineup for the second straight game with an unspecified injury. Manager David Ross said Contreras is day to day, and he didn’t want to be specific about his issue "for competitive advantage stuff." ... LHP Wade Miley (elbow soreness) felt good after his bullpen session Sunday. He planned to play catch Tuesday. ... SS Andrelton Simmons (right shoulder inflammation) continues to take live BP in Arizona, and he is adding throws across the diamond to his throwing program. ... OF Clint Frazier (appendicitis) planned to ride a bike Tuesday as he starts to ramp up his activity. He said the appendicitis was his first surgery ever. "It sucked. It hurt," a grinning Frazier said.

Right-handers Lucas Giolito (0-1, 2.57 ERA) and Kyle Hendricks (1-2, 5.47) start on Wednesday night. Giolito pitched six innings of three-run ball for the White Sox in a 5-1 loss to the Angels on Friday. Hendricks was tagged for six runs and seven hits in 4 1/3 innings of an 11-1 loss at Milwaukee last week.