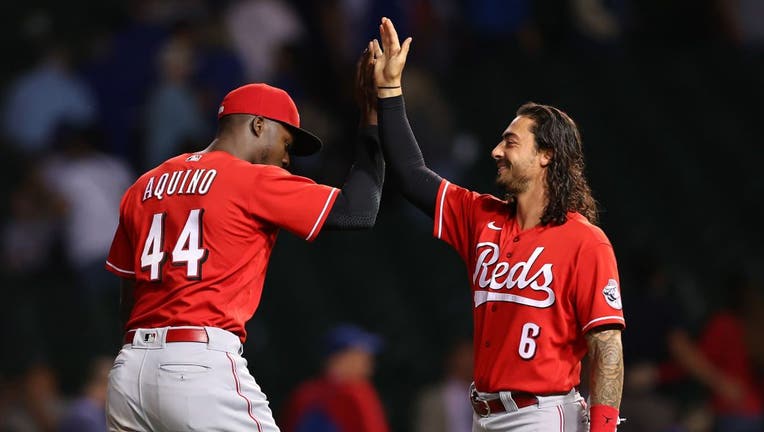 Aristides Aquino #44 and Jonathan India #6 of the Cincinnati Reds celebrate after defeating the Chicago Cubs 7-1 at Wrigley Field on September 07, 2022 in Chicago, Illinois. (Photo by Michael Reaves/Getty Images)

The 34-year-old lefty is 3-0 in his last four starts after losing a career-worst eight straight decisions.

The Cubs hit into three double plays and lost for the fourth time in five games.

Chicago took a 1-0 lead in the second on consecutive singles by Nelson Velasquez, Yan Gomes and P.J. Higgins. But Minor helped his cause by reaching behind his back to field a grounder by Nick Madrigal and turning it into an inning-ending double play.

"He had a good breaking ball working," Reds manager David Bell said. "He threw strikes. It seemed like any time he got into trouble and got a runner on, he bared down and made a pitch. He got three groundballs when he needed them."

Aquino continued his power surge against the Cubs, hitting a leadoff home run in the third against rookie starter Javier Assad (0-1) that traveled a projected 438 feet.

Aquino capped the Reds’ scoring with his seventh home run, a leadoff drive in the ninth against rookie Jeremiah Estrada. Aquino has two multi-homer games this season and three in his career. He has hit 12 home runs in 84 career at-bats against the Cubs.

"I didn’t think about that," Bell said. "For us, we’re so focused on what he’s trying to do, the hard work he’s putting in, and it’s fun to see him going to the plate with confidence. And the harder he works, the more success he has, the more that confidence continues to build."

Jake Fraley’s solo homer off Assad in the fourth put the Reds ahead 2-1.

Aquino had an RBI single during a four-run sixth. Assad was pulled after giving up consecutive singles to Jonathan India and Kyle Farmer with one out.

Spencer Steer legged out an infield hit off reliever Erich Uelman, and a throwing error by third baseman Christopher Morel allowed another run to score. Donovan Solano and Aquino capped the rally with consecutive RBI singles off Uelman and Michael Rucker.

Assad, making his third start and fourth major league appearance, had allowed one run in 10 innings prior to Wednesday.

"He’s got a really good way of pitching in with his two-seamer, which is really unnatural for a young guy," Cubs manager David Ross said. "He has a good feel for that and deception with his slider."

STEER AROUND THE FIELD

Steer made his first major league start at second base, and Bell intends to move his recently promoted rookie to various positions.

"I think he’s more used to that than playing one position," Bell said. "I’d like to play him in the outfield. I’m not going to force that."

Steer, 24, who was acquired Aug. 2 as part of the trade that sent RHP Tyler Mahle to the Twins, has made two starts at first base and one at third since being promoted to the majors Sept. 1. Steer played third base primarily in the Twins organization, but he played five positions, including shortstop and right field, at Triple-A Louisville prior to his promotion to the Reds.

Reds: RHP Hunter Greene (right shoulder strain) will make one more minor league rehab start for Triple-A Louisville. Greene threw 48 pitches in two innings Tuesday against Columbus, and Bell stressed the importance of Greene regaining his endurance before returning. Greene could return Sept. 17 in a doubleheader against the Cardinals if he remains healthy, Bell said. … OF Nick Senzel (right ankle sprain) underwent X-rays that showed no new damage. He is day-to-day. … RHP Connor Overton (stress reaction in lower back) is scheduled to start a rehab assignment next week at Louisville and would rejoin the Reds as a reliever if he returns this season, Bell said. Overton hasn’t pitched since May 17.