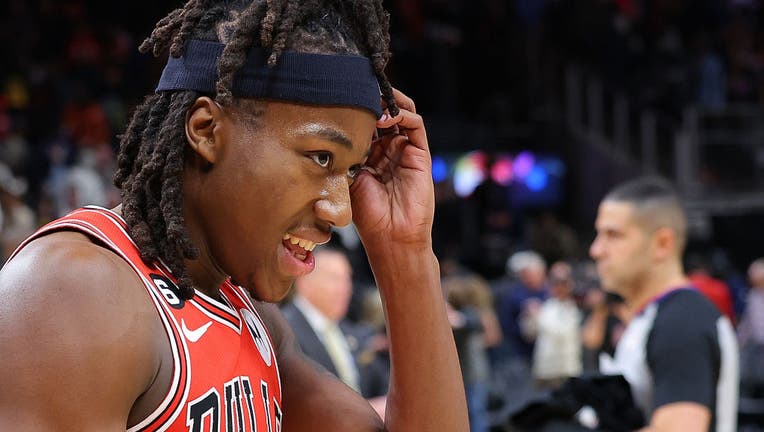 ATLANTA, GEORGIA - DECEMBER 21: Ayo Dosunmu #12 of the Chicago Bulls reacts after hitting the game-winning basket as time expired in their 110-108 win over the Atlanta Hawks at State Farm Arena on December 21, 2022 in Atlanta, Georgia. NOTE TO USER:

ATLANTA - Ayo Dosunmu banked in a putback jumper as time expired and the Chicago Bulls rallied after blowing an 18-point lead to win their second straight game, 110-108 over the Atlanta Hawks on Wednesday night.

Dosunmu inbounded a pass from the Chicago sideline with four seconds remaining to DeRozan, who missed a jumper with an airball from the left baseline, but Dosunmu was in place to grab the rebound on the right baseline and score at the buzzer.

Trae Young scored 34 points for Atlanta, and Dejounte Murray had 15 points and 10 assists.

Rookie AJ Griffin made a corner 3-pointer to make it 88-87 and give the Hawks their first lead with 9:31 remaining. The rookie followed with a right-wing 3 at the 7:48 mark to put Atlanta up 95-90, and the Hawks led until LaVine hit consecutive jumpers to make it 106-104 with 44.7 seconds remaining.

Consecutive alley-oop dunks by Onyeka Okongwu, who finished with 18 points and 11 rebounds, made it 108-all, but Dosunmu had the final say.

Young hit a season-high seven 3-pointers for the Hawks, who overcame a sloppy shooting in the first half by chipping away at the lead in the third and finally taking control with a 19-7 run in the fourth.

Bulls: Caruso got tangled up and hit the floor late in the second. He stayed down on his back for a minute before play was halted, sat up and walked off the floor under his own power.

Hawks: Young, who had 16 points in the first quarter and 13 in the second, began the game as the only NBA player averaging at least 25 points and 10 assists.