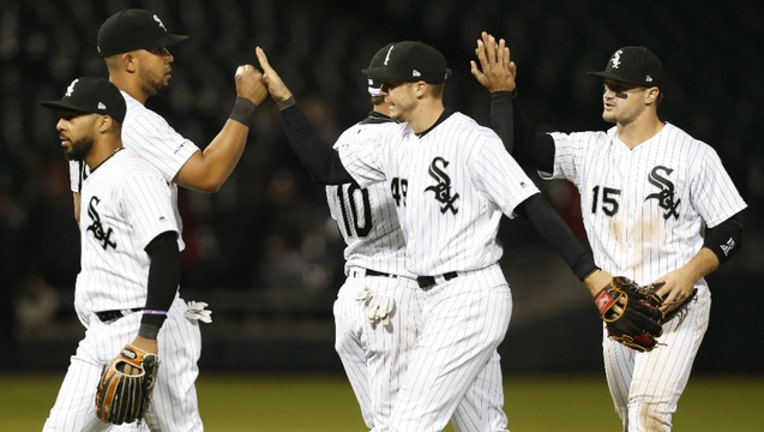 CHICAGO (AP) - Manny Bañuelos is determined to make the most of perhaps the biggest opportunity of his career.

Bañuelos pitched five-hit ball into the sixth inning in his first start since replacing Ervin Santana in the rotation, and the Chicago White Sox held off the slumping Baltimore Orioles for a 5-3 win on Monday night.

The 28-year-old Bañuelos (2-0) made seven appearances for Atlanta in 2015, but didn't make it back to the majors until this year. The left-hander tossed four scoreless innings at Baltimore last week in his first start since his time with the Braves, and then took over Santana's spot after the veteran right-hander was designated for assignment on Friday.

"I just want to do my best in that spot," Bañuelos said.

Tim Anderson and Yonder Alonso each hit a two-run homer as Chicago earned in its third consecutive win, matching a season high. James McCann had three hits and is batting .444 (12 for 27) in his last six games.

"I didn't have my best changeup today," Means said. "I was throwing some good ones down in the zone that they weren't offering at, and then I tried to make too much of an adjustment and left some up."

Alonso connected with two out in the second, sending a drive to right for his fifth homer. He also went deep in his last game, belting a solo shot in Friday night's 12-11 victory over Detroit.

After Severino opened the third with an opposite-field drive into the Orioles' bullpen in right, Adam Engel led off the bottom half with a bunt single and Anderson made it 4-1 with a one-out homer into the stands in left.

Davis tried to rally Baltimore with a pair of run-scoring singles, but the Orioles went 2 for 9 with runners in scoring position. After Davis' hit made it 5-3 in the eighth, Severino flied out and Rio Ruiz popped out to strand two baserunners.

"We're kind of in a little bit of a funk here where we're just not driving in the runs," manager Brandon Hyde said.

Alex Colomé worked the ninth for his sixth save.

Bañuelos was charged with two runs in a career high-tying 5 2/3 innings. He struck out six and walked three.

"He was really good," Alonso said. "I felt like he had all his pitches working."

It was Hyde's first game in Chicago since he left his job as bench coach of the Cubs to take over the Orioles in December.

"It's fun to come home," Hyde said before the loss. "It's fun to sleep in your own bed and get up, go to my normal breakfast spot and kind of have a similar routine that I did when I was here. It was awesome."

Orioles: RHP Nate Karns (right forearm strain) returned to the 10-day injured list after struggling while on a rehab assignment in the minors. Karns pitched for Triple-A Norfolk on April 20 and Double-A Bowie on Thursday, allowing a total of five runs in 1 1/3 innings. The 31-year-old Karns was in Baltimore on Monday to get checked out by the team's medical staff. "I just don't think he's feeling right," Hyde said. ... OF Trey Mancini missed his second straight game with a bruised right index finger. Mancini, who is batting .355 in 28 games, is day to day.

White Sox: RHP Lucas Giolito (strained left hamstring) threw 50 pitches in the bullpen. He took a break after 35 to simulate the end of an inning. "I feel really good," Giolito said. "I feel good to go for games. That's where I'm at." He could return during Chicago's homestand. ... OF Eloy Jiménez (high right ankle sprain) threw before the game. The 22-year-old rookie got hurt Friday night. "We'll know in a couple of weeks where he's at," manager Rick Renteria said. "But today's a first step, obviously a positive step for us."

Right-handers Andrew Cashner (4-1, 4.18 ERA) and Iván Nova (0-3, 8.42 ERA) are scheduled to pitch Tuesday night, but there is rain in the forecast. Cashner is 4-0 with a 2.86 ERA in his last five starts for the Orioles. Nova was tagged for nine runs in four innings in a 9-1 loss at Baltimore last Tuesday night.