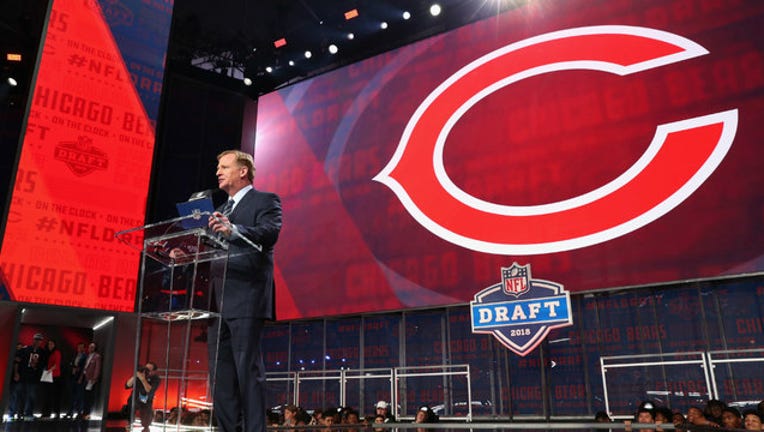 NFL Commissioner Roger Goodell announces a pick by the Chicago Bears during the first round of the 2018 NFL Draft at AT&T Stadium on April 26, 2018 in Arlington, Texas. (Tom Pennington/Getty Images)

LAKE FOREST, Ill. (AP) - Chicago Bears general manager Ryan Pace insisted this week he is no fan of smokescreens. Now, it's time to find out if he was putting one up.

The Bears figure to have a chance to add a top running back and core player to a team that won the NFC North in coach Matt Nagy's first season when they make their first pick of the draft in the third round on Friday night.

The first day was as quiet as expected with Pace making no stunning trade to jump into the opening round. But things figure to pick up, with Chicago owning the No. 87 overall pick.

That is also when everyone else could find out how serious Pace was Tuesday when he insisted the Bears "feel good" about the running backs they have.

"I don't spend a ton of time and energy into putting out those smokescreens or misleading (information)," said Pace, who was not available for comment on Thursday as the first round wrapped up. "This time of year I think it's OK to be a little boring in these moments and we can have more thorough discussions after the draft."

Pace might have been putting one up when he dismissed the idea that the Bears were zeroing in on a running back in the draft after trading Jordan Howard to Philadelphia last month.

Howard didn't quite fit in a system favoring pass-catching running backs and set career lows in yards rushing (935) and attempts (250) in his third season. But he still had more combined carries than the running backs currently on Chicago's roster -- Tarik Cohen, Mike Davis, Taquan Mizzell Sr. and Ryan Nall. Even with receiver Cordarrelle Patterson getting some carries, there still is room for a running back.

Pace hasn't drafted one higher than the fourth round since he was hired in 2015. Howard was a fifth-rounder who made the Pro Bowl as a rookie in 2016 and ran for more than 1,100 yards in each of his first two seasons.

If he goes that route at No. 87, his options could include Alabama's Damien Harris, Penn State's Miles Sanders, Oklahoma's Rodney Anderson, Oklahoma State's Justice Hill and Iowa State's David Montgomery.

No matter what they do, the Bears came into the draft in a much different spot than they were a year ago.

They ended a run of four straight last-place finishes and made the playoffs for the first time since the 2010 season. A big catalyst was the blockbuster trade with Oakland for All-Pro edge rusher Khalil Mack.

The Bears sent this year's first-round pick -- No. 24 -- to the Raiders. They dealt their second-rounder to New England when they traded up in last year's draft to get receiver Anthony Miller.

That leaves Chicago with one pick each in the third, fourth and fifth rounds plus two seventh-rounders.