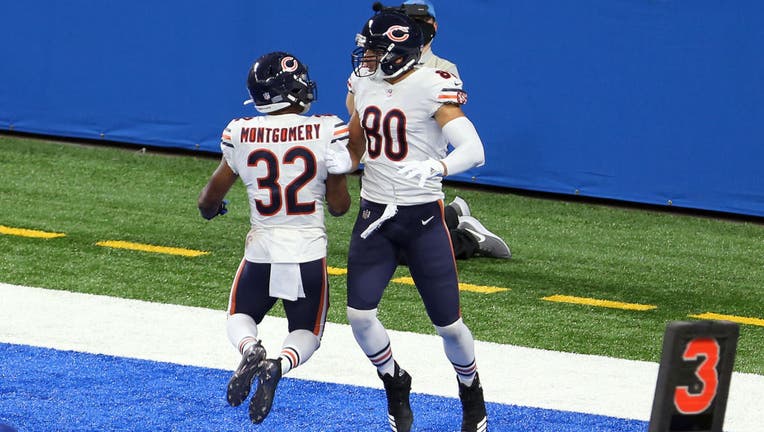 Chicago Bears tight end Jimmy Graham (80) celebrates with Chicago Bears running back David Montgomery (32) in the endzone after making a touchdown during the second half of an NFL football game against the Detroit Lions in Detroit, Michigan USA, on S

CHICAGO - One more rough quarter, one less dropped pass and the Chicago Bears would be in a far different place.

The Bears performed a major escape in the season opener, rallying from 17 down in the fourth quarter behind Mitchell Trubisky’s three touchdown passes and hanging on for a 27-23 victory at Detroit.

They’ll take the win — their first in an opener since 2013, when they beat Cincinnati on the way to a 3-0 start. And they’ll try to build on it when they host the New York Giants on Sunday.

“Our guys stuck together and turned it up when we had to,” coach Matt Nagy said Monday. “The problem is we can’t get in that situation early on. You can’t dig that hole. We all collectively start looking at the tape and you say, ’OK, where are we at? What are the issues?’”

The Bears got their run game going, a positive sign for a team that too often ignored it last season. Trubisky completed 20 of 36 passes for 242 yards. He was terrific down the stretch, going 8 of 10 for 89 yards with three TDs and a 143.3 rating after misfiring for three quarters. And the calls for Super Bowl 52 MVP Nick Foles probably would be ramping up around Chicago if not for the strong finish.

The performance by the defense was a mixed bag at best.

The Bears stopped Matthew Stafford and the Lions early on and got picked apart by him for awhile. But they also came up with the sort of clutch turnover they didn’t force often enough last season — Kyle Fuller’s interception on a ball deflected by safety Eddie Jackson to set up the go-ahead touchdown.

But the Bears won. And coming off a disappointing 8-8 season, they’ll take it.

The Bears ran for 149 yards on 28 carries, not a bad start after Chicago ranked 27th in rushing last season.

David Montgomery had 64 yards and averaged 4.9 per attempt, and Tarik Cohen added 41 yards on seven runs. The success on the ground also helped free up the passing game.

“That’s gonna open up some of our bigger shots down the field for these guys,” receivers coach Mike Furrey said. “Maybe instead of catching eight balls for 80 yards, now you’re gonna catch six balls for about a buck 10 or a buck 20 because you’re gonna hit one or two of those big throws. That’s more appealing to a wideout. You’d rather have 60 catches for 1,000 yards than 80 catches for 900.”

A sore spot last season, third downs were an issue in the opener.

The Bears converted just 2 of 11 in the game and failed on their first seven before Anthony Miller caught an 18-yarder on third-and-10 at their 41 late in the third quarter. Jimmy Graham finished that drive by hauling in a 2-yard TD in the fourth to give Chicago its first touchdown and get the comeback started.

After flashing his potential down the stretch last year, receiver Anthony Miller opened his third season with 76 yards on four catches. He came through with a lunging grab for a 27-yard touchdown to put the Bears on top with just under two minutes left.

No one’s stock really took a major hit in Week 1, though Trubisky’s was sinking until the fourth quarter.

Nagy said no one was injured during the game.

1 — The Bears had just one sack — by Akiem Hicks — and one takeaway.

The Bears play their home opener against the New York Giants, coming off a Monday Night matchup against Pittsburgh in their first game under coach Joe Judge.