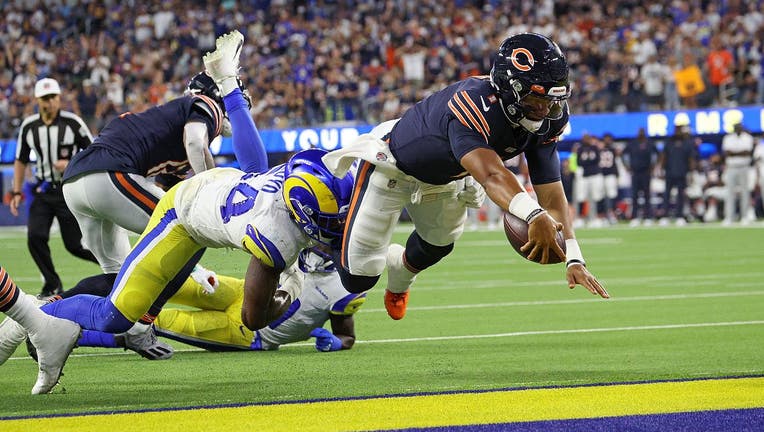 Justin Fields of the Chicago Bears dives for a touchdown during the second half against the Los Angeles Rams at SoFi Stadium on September 12, 2021 in Inglewood, California. (Harry How/Getty Images / Getty Images)

INGLEWOOD, Calif. - For someone who acknowledged being a little starstruck as he ran onto the field for his NFL debut, Justin Fields operated with a calm and cool demeanor with the limited snaps he got.

The Chicago Bears rookie quarterback was in for only five plays during Sunday night’s 34-14 loss to the Los Angeles Rams, but he scored his first professional touchdown during the third quarter.

Fields, the 11th overall selection in April’s draft, completed both of his passes for 10 yards, and his only rushing attempt was for a 3-yard TD. Andy Dalton got the start for the Bears.

"I’m not going to lie, I was taking things in during the game and thinking this is crazy," Fields said. "It was definitely awesome getting out there and just being on the field."

Coach Matt Nagy said the Bears didn’t have a set number of plays for Fields, and added that falling behind by two scores late in the third quarter took away some opportunities.

"The times he got in, he did well. He did a great job on that TD run and on his first throw," Nagy said. "We knew where and when we were going to use him and we stuck to that."

Fields made his debut on the Bears’ fourth offensive play and completed a 9-yard pass to Marquise Goodwin down to the Rams 3. But Chicago was unable to score when Dalton was picked off by David Long Jr. in the end zone on the next play.

Fields’ throw was a run-pass option where he said he saw there was going to be soft coverage near the sideline.

On the touchdown, which brought the Bears within six points at 20-14 with 4:20 remaining, Fields got a nice lead block from tight end J.P. Holtz. That allowed him to create enough separation from Rams linebacker Leonard Floyd and go around right end.

"The end froze a little bit and I thought I could beat him on the edge," Fields said.

Fields said they practiced rotating quarterbacks enough during the week in practice that coming in when he did wasn’t an odd feeling. He also said he stayed engaged during the game by hearing the plays on the sideline and repeating it as if he was calling it in the huddle.

The Bears trailed 13-7 at halftime in large part due to Dalton’s end zone interception and not converting on two fourth-down opportunities.

Dalton — who signed with the Bears during the offseason — was 27 of 38 for 206 yards and thought the rotation with Fields worked out fine.

"It was the first time doing it, but it definitely helped us," Dalton said. "We are trying to find ways to put the ball in the end zone."

Nagy was pleased with Dalton’s performance as well as the running game, which was led by David Montgomery’s 108 yards. But too many defensive lapses and not being able to convert on four fourth-down opportunities ended up costing them.

"I thought we got the run game going, but we have room to grow," he said.