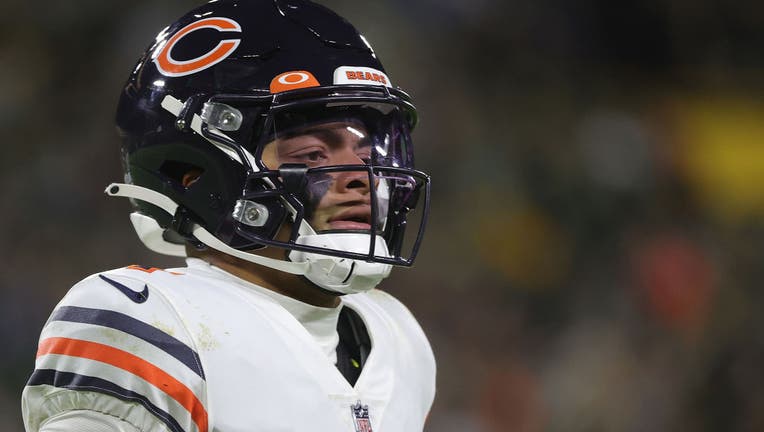 Justin Fields #1 of the Chicago Bears runs to the sideline during a game against the Green Bay Packers at Lambeau Field on December 12, 2021 in Green Bay, Wisconsin. The Packers defeated the Bears 45-30. (Photo by Stacy Revere/Getty Images)

GREEN BAY, Wis. - After spending the last three seasons looking up at the Green Bay Packers in the NFC North standings, the Chicago Bears head into Lambeau Field in an unusual position.

The Bears (1-0) lead the Packers (0-1) in the division race for the first time since 2018, when Chicago last earned the NFC North title. The Packers have won the NFC North every year since and are 6-0 against the Bears during that stretch.

Chicago would love to take a two-game edge over the three-time defending division champions by winning Sunday night. Even with the Bears coming off a win and the Packers coming off a loss, Green Bay is a 9 1/2-point favorite, according to FanDuel Sportsbook.

"It's the tradition of this rivalry," Bears quarterback Justin Fields said. "Means a lot to us as a team, to the fan base, to the people upstairs. It just means a lot to everyone in this building."

The Bears' recent struggles in this series stem from their inability to slow reigning MVP Aaron Rodgers.

The Packers are 23-5 against the Bears in games Rodgers has started. Rodgers appreciates the part he has played in the NFL's oldest rivalry.

"I love the history of this game," Rodgers said. "When I got to this squad, Chicago was beating us in the all-time record. Now we're up by eight, I believe."

"That does mean a lot to me," Rodgers said.

Rodgers is coming off a sluggish performance, going 22 of 34 for 195 yards with no touchdown passes, one interception and a lost fumble in a 23-7 loss at Minnesota in his first game since the trade of two-time All-Pro receiver Davante Adams to the Las Vegas Raiders.

Chicago won its opener 19-10 over the San Francisco 49ers, causing some Bears to celebrate by sliding along a rain-soaked Soldier Field.

If the Bears follow that up with a victory at Lambeau Field, they'll have even more reason for jubilation.

While Chicago has struggled mightily in this series lately, new Bears coach Matt Eberflus has been successful against Green Bay.

Eberflus was Indianapolis' defensive coordinator in 2020 when the Colts beat Green Bay 34-31 in overtime. After allowing 28 first-half points, the Colts held the Packers to just a field goal the rest of the way.

Bears offensive coordinator Luke Getsy worked on the Packers' staff from 2014-21 and was quarterbacks coach the last two seasons.

The Bears beat the 49ers despite gaining just 204 yards, the lowest total by any team in the season's opening week.

The Packers posted their lowest point total since a 38-3 loss to the New Orleans Saints in their 2021 season opener.

Bears defensive end Robert Quinn set a franchise record last season with 18 1/2 sacks and got three of them in Chicago's two matchups with the Packers.

The Packers allowed four sacks against the Vikings and are facing uncertainty on their offensive line. Projected starting tackles David Bakhtiari and Elgton Jenkins missed the Vikings game as they recovered from knee injuries, though they've both practiced on a limited basis this week. Guard Jon Runyan Jr. left the Vikings game to get evaluated for a concussion and wasn't practicing early this week.

The Packers have won 12 straight regular-season night games, with 11 of those coming since the start of the 2020 season.

A victory Sunday would give them sole possession of the longest regular-season, prime-time winning streak since 2000. The Indianapolis Colts from 2004-07 and Pittsburgh Steelers from 2007-09 also won 12 consecutive regular-season night games.