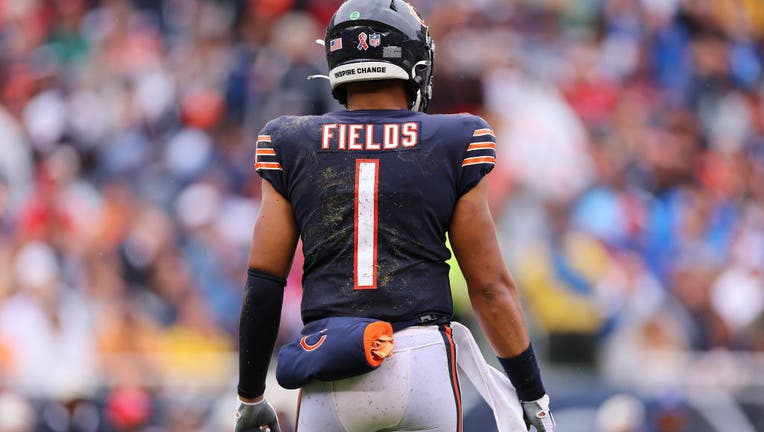 CHICAGO, ILLINOIS - SEPTEMBER 11: Justin Fields #1 of the Chicago Bears looks on against the San Francisco 49ers at Soldier Field on September 11, 2022 in Chicago, Illinois. (Photo by Michael Reaves/Getty Images)

LAKE FOREST, Ill. - The Chicago Bears pulled off a surprise in coach Matt Eberflus’ head coaching debut when they beat San Francisco in a driving rainstorm at Soldier Field on Sunday. They’ll try to do it again when they visit Green Bay this week.

Just don’t tell star linebacker Roquan Smith that beating the 49ers was a surprise. Or that knocking off Aaron Rodgers and the Packers would be, too.

"We didn’t see it as an upset," Smith said Monday. "We expected to go in there and win. You know, maybe you guys, the other media and everyone else said, hey, this and that. But we didn’t care too much about that. We knew we could beat those guys."

Chicago did just that against the 49ers, rallying from 10 down to win 19-10 in a driving rainstorm.

It was a neat start for a new regime. The Bears opted to make major changes after last season, when they went 6-11 and missed the playoffs for the ninth time in 11 years. They hired general manager Ryan Poles and Eberflus to replace the fired Ryan Pace and Matt Nagy, and the new regime went to work restructuring the roster.

Now, after beating a team with Super Bowl aspirations, they get their rivals. The Packers opened with a 23-7 loss at Minnesota, but they’ve owned the Bears in recent decades.

Chicago played relatively clean ball when it came to penalties and turnovers. The Bears were flagged just three times for 24 yards. Their lone turnover was an interception by Fields in the first quarter. Only the New York Giants (30) had more turnovers than Chicago (29) last season.

There’s plenty that needed help, though the conditions didn’t exactly make it easier.

The offense was as messy as the conditions in the first half. That changed with an ad-libbing Fields’ 51-yard touchdown pass to Dante Pettis with Chicago trailing 10-0 in the third quarter. Fields spun away as two defenders closed in on him, and rolled to his left. As he did, Pettis broke toward the opposite side.

Fields found him wide open. Pettis took it the rest of the way.

Interceptions used to be a regular thing for Eddie Jackson. Maybe they will again.

After Fields connected with Equanimeous St. Brown for an 18-yard TD early in the fourth to put Chicago on top 13-10, Jackson picked off Trey Lance near midfield for his first interception since 2019. He returned the ball to the 21, leading to a touchdown run by Khalil Herbert that bumped the lead to 19-10.

Kicker Cairo Santos had a difficult game. Not only did he miss extra points following Chicago’s two fourth-quarter touchdowns, he was involved in an unusual penalty involving a the use of a towel near the end of the first half that pushed the Bears out of field goal range with San Francisco leading 7-0.

Rookie holder Trenton Gill got flagged for a 15-yard unsportsmanlike conduct penalty when he used a towel to pat down the area where the kick would be attempted. Santos also stepped on the towel and used it to dry a different spot before Gill cast it aside.

Last season, Santos made all but one of his 28 extra-point attempts. He was 26 of 30 on field goals, though he did not attempt one Sunday.

The Bears reported no injuries during the game, a plus for a team that was hit hard during the preseason. One question is how long Lucas Patrick will continue to split reps at right guard with Teven Jenkins before moving back to center. Patrick, who was injured early in camp, had a cast on his right arm. Sam Mustipher started at center.

2 — The Bears had two takeaways and both were big. While Jackson set up a touchdown late in the game, Jaylon Johnson helped prevent San Francisco from scoring on its first drive. The 49ers were moving toward their end zone when Johnson knocked the ball from Deebo Samuel at the 12 on a 4-yard run and rookie Jaquan Brisker recovered. The Bears ranked among the worst in the NFL last season in turnover differential.

The Packers are 23-5 against Chicago in games Rodgers has started, including one last season at Soldier Field, where he yelled "I still own you!" to the crowd.