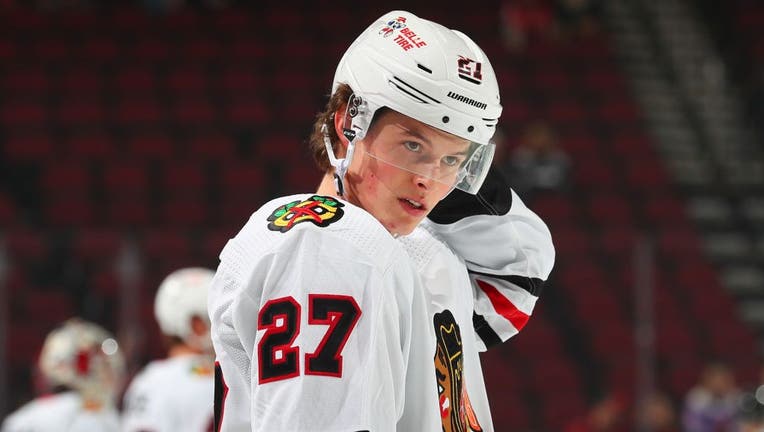 Lukas Reichel #27 of the Chicago Blackhawks warms up prior to the game against the New Jersey Devils on December 06, 2022 at the Prudential Center in Newark, New Jersey. (Photo by Rich Graessle/NHLI via Getty Images)

Chicago also placed forwards MacKenzie Entwistle and Jujhar Khaira on injured reserve, retroactive to Dec. 27. Entwistle has a right wrist injury, and Khaira is dealing with a lower back issue.

The 20-year-old Reichel is one of the organization’s top prospects. He was selected by Chicago with the No. 17 pick in the 2020 draft.

Reichel has 14 goals and 22 assists in 32 games this season with Rockford of the AHL. He has no goals and an assist in 12 career NHL games, including one appearance with Chicago last month.

The 26-year-old Seney has five goals and eight assists in 55 career NHL games with New Jersey and Toronto.

The Blackhawks dressed seven defensemen for Tuesday night’s 4-1 loss to Tampa Bay after forward Tyler Johnson was sidelined by an illness. Then star forward Patrick Kane departed with a lower-body injury.

Chicago has dropped five in a row heading into Friday night’s game against Arizona. It is just 2-20-1 in its last 23 overall.