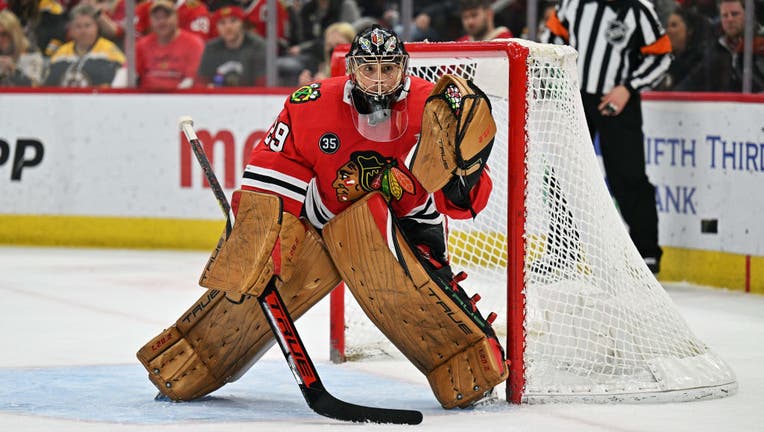 Goaltender Marc-Andre Fleury #29 of the Chicago Blackhawks defends the net against the Boston Bruins on March 15, 2022 at the United Center in Chicago, Illinois. (Photo by Jamie Sabau/Getty Images)

The NHL playoffs just wouldn’t be the same without Marc Andre-Fleury being somewhere in the mix.

Unable to backstop the retooling Chicago Blackhawks into contention, the three-time Stanley Cup-winner is headed to Minnesota to help the high-scoring Wild shore up their inconsistent goaltending issues for a late-season playoff push.

Minnesota gave up a conditional first-round pick in this year’s draft to acquire the 37-year-old Fleury hours before the NHL trade deadline on Monday.

Fleury, who last missed the playoffs during his first full season in Pittsburgh 16 years ago, jumps 10 spots in the Western Conference standings by landing in Minnesota where he will share the goaltending duties with Cam Talbot. The Wild opened the day sitting fourth overall -- and third in the Central Division -- in a tightly contested playoff race.

In acquiring Fleury, who won a Vezina Trophy a year ago with Vegas, Minnesota traded backup goalie Kaapo Kahkonen and a fifth-round draft pick to San Jose for defenseman Jake Middleton. Kahkonnen had a 12-8-3 record this season and was 0-5-1 with 21 goals allowed in his past six starts.

The Wild made a separate trade in which they acquired a second-round pick in the draft this summer from the rebuilding Arizona Coyotes for unsigned prospect Jack McBain, who represented Canada at the Beijing Olympics without NHL players.

— Marcus Johansson is heading back to the team that drafted him. The Washington Capitals acquired Johansson from the expansion Seattle Kraken, in exchange for forward Daniel Sprong and two later-round draft picks. Seattle also retained 50% of Johansson’s $1.5 million salary cap hit.

Johansson, who signed with Seattle last summer, is on his sixth team since the Capitals traded him to New Jersey in the summer of 2017. The 31-year-old has six goals and 23 points in 51 games for the Kraken.

Johansson was a 2009 first-round pick of the Capitals, and he played his first seven NHL seasons with Washington.

— The Coyotes acquired unsigned forward prospect Nathan Smith and Bryan Little’s contract from the Winnipeg Jets for a 2022 fourth-round pick. Little is signed for two more seasons at an annual salary cap hit of $5.3 million and is not expected to play again because of concussion issues.

"We are excited to acquire Nate," Coyotes GM Bill Armstrong said. "He is a very skilled two-way center who is relentless and competes hard every night. We are very happy to acquire his rights and look forward to him joining the Coyotes organization."

— In a separate move, the Jets acquired a conditional seventh-round pick in dealing defenseman Nathan Beaulieu to Pittsburgh. The Penguins, who opened the day third in the Metropolitan Division standings, made the move with an eye on the playoffs. Beaulieu, who is in the final year of his contract, is sidelined by a lower-body injury sustained earlier this month. He will remain on long-term injured reserve.

He has four assists in 24 games this season.

— The New York Rangers bolstered their blue line by acquiring veteran defenseman Justin Braun from Philadelphia for a 2023 third-round pick. Braun is in the final year of his contract. Rangers general manager Chris Drury had been looking for experience on defense after acquiring forward Frank Vatrano from Florida for a fourth-rounder.

— One goaltender who was thought to be available came off the market before the deadline when Anton Forsberg re-signed with Ottawa. Forsberg inked an $8.25 million, three-year deal.