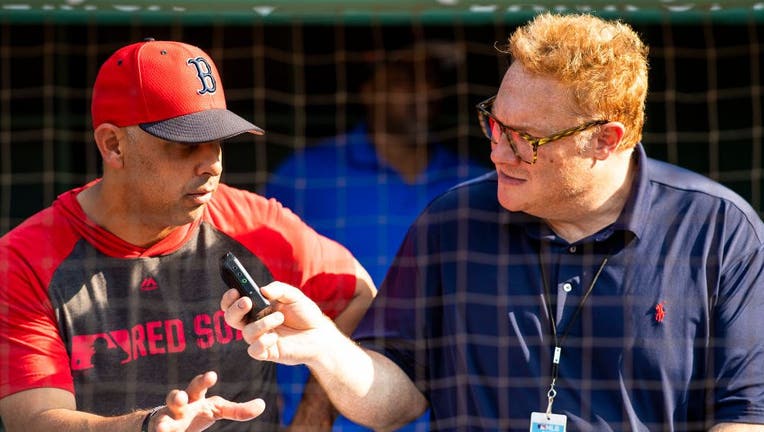 Manager Alex Cora of the Boston Red Sox talks with Boog Sciambi of ESPN before a game against the New York Yankees on July 28, 2019 at Fenway Park in Boston, Massachusetts. (Photo by Billie Weiss/Boston Red Sox/Getty Images)

Sciambi joins color analyst Jim Deshaies in the booth for Marquee Sports Network, which is jointly owned by the Cubs and Sinclair Broadcast Group.

Sciambi has worked at ESPN in a variety of roles since taking a full-time position at the network in 2010, including TV play-by-play for Wednesday night games since 2014. He will continue to do some work for ESPN, in addition to his job at Marquee.

"I don’t take lightly the position I’m being put in because I know how much this team, this job, means to the fans," he said Monday on a Zoom call. "I’m thrilled to get this opportunity. It is going to be fun. I look forward to doing it and connecting with the community (and) doing it every day, getting a chance to connect with the fans. It’ll be a lot of fun."

Kasper joined the radio booth of the crosstown White Sox last month. Kasper, who spent 16 seasons on the North Side, will call games alongside former major leaguer Darrin Jackson.

Sciambi recalled watching Cubs games on WGN growing up and visiting Wrigley Field for the first time, when he was about 12 and his dad took him. They saw Nolan Ryan pitch for the visitors. Sciambi’s family and friends also threw him a surprise 30th birthday celebration at Wrigley when he was there with the Marlins.