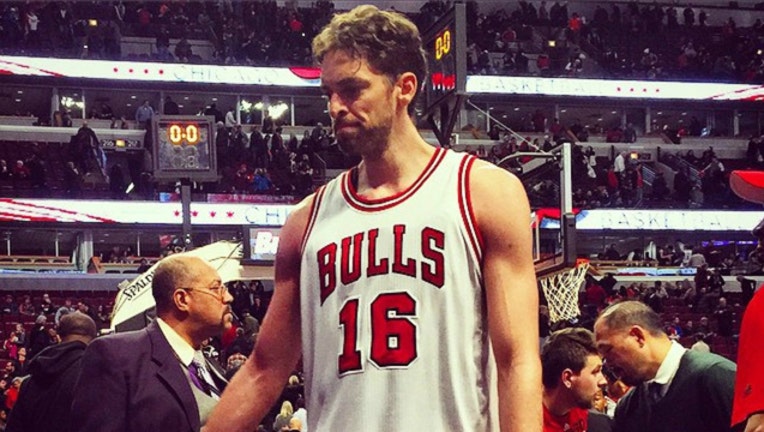 MADRID (AP) - Pau Gasol is considering not playing at the Olympics because of the Zika virus.

The Spanish basketball player said Monday there is too much uncertainty about the situation in Brazil and anyone going to Rio de Janeiro for the games should "think about" whether it's worth the risk.

The Chicago Bulls player said other Spanish athletes have also expressed their concerns about the virus and are also considering skipping the games.

"It wouldn't surprise me to see some athletes deciding not to participate in the games to avoid putting their health and the health of their families at risk," Gasol said, adding that he was among the athletes making such considerations.

"I'm thinking about (whether or not to go)," he said. "Just like every athlete, or any other person considering going to Rio, should be thinking about it."

Without giving names, Gasol said he talked to other athletes who told him they may not participate in the games.

"Some of these athletes are planning to have children in the near future and this could affect them, it could affect the health of their kids and their wives," he said at an event for one of his sponsors in Madrid. "Their health should come first."

Brazil has been badly hit by Zika, the mosquito-borne virus linked to severe birth defects and possible neurological problems in adults.

Gasol said officials involved in the games must come forward with "more clear information" about the risks athletes could be facing if they decide to compete in Rio.

"I hope the national Olympic committees and the health organizations can be as clear as possible about the risks in Brazil so athletes can decide whether or not to take risks," he said. "I don't think we've been told enough about it."

Later Monday, the Spanish Olympic committee released a statement that included updated recommendations from the World Health Organization regarding the virus, saying "every member" of its delegation should be aware of them. The committee said it has been constantly relaying to the federations the information it receives from health authorities and the International Olympic Committee.

Gasol mentioned the call from 150 health specialists to consider postponing or moving the Aug. 5-21 Olympics, something the WHO rejected last week.

"We need to understand the seriousness of the situation," Gasol said. "Even though there are some soothing words being said, we know that there are different opinions about the subject."

Gasol said he is being proactive and has been trying to gather as much information as possible about the virus and the risks it could pose for himself and his family. He said he has contacted experts in the area to try to know more about the virus.

"I feel responsible to know more about the situation and to inform everyone about it," he said. "It's important to talk openly about this. It's a very delicate situation."

Gasol helped Spain win the silver medal at both the 2008 and 2012 Olympics.

Tales Azzoni on Twitter: http://twitter.com/tazzoni. His work can be found at http://bigstory.ap.org/content/tales-azzoni