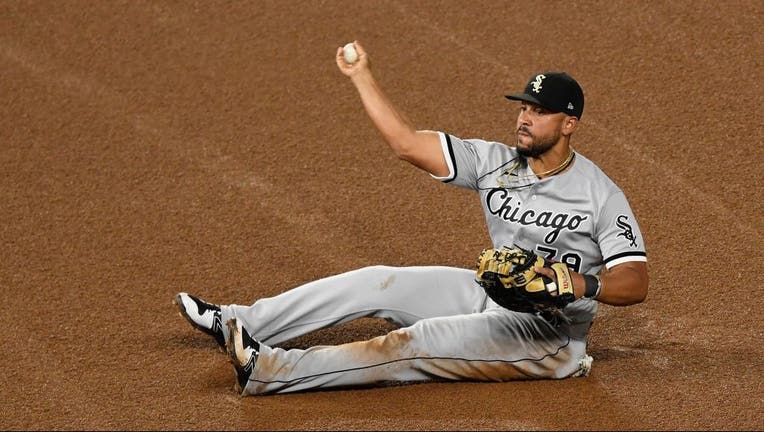 Jose Abreu #79 of the Chicago White Sox makes a play to get out Eddie Rosario #20 of the Minnesota Twins at first base during the fourth inning of the game at Target Field on September 1, 2020 in Minneapolis. (Photo by Hannah Foslien/Getty Images)

MINNEAPOLIS - Michael Pineda hadn’t pitched a major league game in almost a year. Byron Buxton sat out 11 during his latest trip to the injured list.

Back on the field Tuesday night, Pineda and Buxton demonstrated just what Minnesota has been missing, rallying the Twins past the Chicago White Sox 3-2 to snap a six-game losing streak.

Buxton came off the injured list and had two hits, including the go-ahead single in the seventh inning. The Gold Glove center fielder also robbed Edwin Encarnación of a home run in the sixth.

“When I check the lineup today and see Byron Buxton in center field today, I say, ‘Whoa, this is going to be a good game,’” Pineda said. “We love seeing Buxton.”

Pineda threw six strong innings, giving up two runs and six hits in his first outing after being suspended 60 games last year for using a banned diuretic. He served the final 36 games of the penalty this season, returning to provide a big boost to Minnesota’s rotation.

“The pitching he did tonight was tremendous and what, 360-something days since he threw a pitch off the mound in a game?” Buxton said. “You can’t want anything better. He went out there and was a bulldog tonight.”

Caleb Thielbar (1-0) earned the win with a scoreless inning of relief after the Twins rallied against Chicago’s bullpen. Matt Wisler got his second career save and first since 2016 with Atlanta.

The talented but oft-injured Buxton capped his return from left shoulder inflammation with a single to drive in Nelson Cruz in the seventh.

Tim Anderson had three hits and Eloy Jiménez delivered a two-run double, but Chicago lost for just the third time in 15 games and fell into a tie with Cleveland atop the AL Central.

Pineda found his stride last year in his first season with Minnesota following Tommy John surgery. He was 7-1 with a 2.76 ERA in 11 starts before his suspension for a diuretic was announced in September. He was suspended 80 games before an appeal reduced the punishment to 60 games.

Pineda was allowed to work out with the team in the spring and had been pitching at the team’s alternate training site before being activated.

His return to the mound got off to a bumpy start.

Anderson led off the game with an infield single after he beat Pineda to first base. José Abreu singled and both runners scored on Jiménez’s double. Pineda then retired 11 of the next 12 batters.

The big right-hander appeared to hit a wall in the fifth when he allowed a pair of hits and a walk to load the bases, but he got Abreu to ground out weakly to end the inning.

“He settled down, kept his slider down and away,” Chicago manager Rick Renteria said. “His fastball had pretty good life. But as you can see, he’s a big man, good angle, balls getting on top of guys. He was able to minimize the damage.”

The Twins scored a run in the fifth and then tied the game in the sixth with a pair of pinch hits. Jake Cave tripled and scored on Luis Arraez’s double.

Keuchel allowed just an unearned run on seven hits, but his night was cut short as he dealt with a stomach issue. He pitched a season-low five innings. He’s permitted two runs or fewer in all but one of his eight starts this season.

“He was really battling through it,” Renteria said. “He had some issues so he couldn’t go any further.”

White Sox: Renteria said he hopes 3B Yoán Moncada is able to return Wednesday after missing his third straight game with lingering soreness in the back of his left leg.

Twins: Baldelli said 3B Josh Donaldson could return “in a matter of a day, I would say, or two” from his strained right calf. Donaldson played an intrasquad game at the team’s alternate site on Monday. He’s missed the past 27 games with the injury after hitting .182 with one homer in his first seven games of the season.

Chicago sends RHP Reynaldo López (0-1, 9.00 ERA) to the mound Wednesday. López will be making his third start since a stint on the injured list due to right shoulder soreness. He allowed two runs in four innings, his longest outing of the season, at Kansas City last time out. Minnesota counters with RHP José Berríos (2-3, 4.75), who gave up five runs in four innings to the White Sox in the season opener.