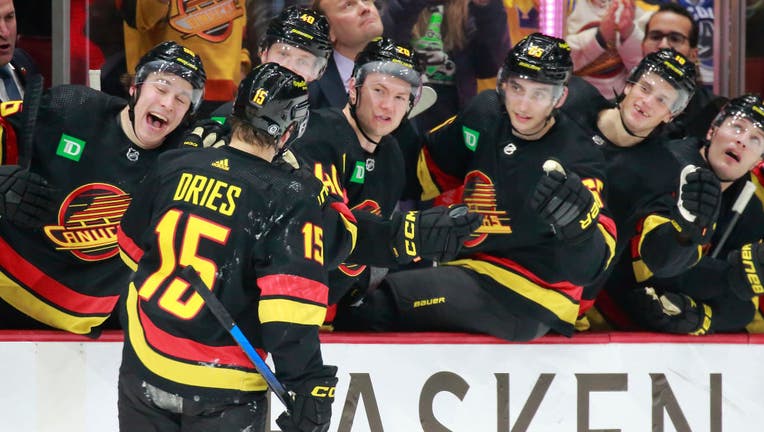 Sheldon Dries #15 of the Vancouver Canucks celebrates his goal with teammates during the third period of their NHL game against the Chicago Blackhawks at Rogers Arena January 24, 2023 in Vancouver, British Columbia, Canada. (Photo by Jeff Vinnick/NHL

VANCOUVER, British Columbia - After a week of disruptions and distractions, the Vancouver Canucks were finally able to concentrate on playing hockey and they rewarded new coach Rick Tocchet with a win in his first game behind the bench.

Dakota Joshua and Sheldon Dries scored 34 seconds apart in the third period, and the Canucks beat the Chicago Blackhawks 5-2 on Tuesday night in Tocchet’s debut.

"It felt a little different having a new coach back there," said Joshua, who scored his seventh goal of the season and fought Chicago’s Connor Murphy in the first period. "It was everybody pulling together, wanting to take a step in the right direction.

"We seemed to all be on the same page for most of the night. We’ll be looking to follow up that performance tomorrow (in Seattle)."

Tocchet was named the 21st head coach in Canucks history Sunday after Bruce Boudreau was fired along with assistant Trent Cull. Vancouver hired Adam Foote as an assistant coach and Sergei Gonchar as a defensive development coach.

There was a mixture of boos and cheers when Tocchet was introduced to the crowd during the first period. The game was 3:30 old when a fan threw a Canucks jersey on the ice.

Vancouver failed to score on five power-play chances, but outshot the Blackhawks 48-14 and overcame a pair of one-goal deficits.

"The players bought in," said Tocchet, whose most recent coaching job was with the Arizona Coyotes from 2017-21. "There’s been some tough circumstances the last few days.

"There was a lot of emotions and head spinning. I threw some stuff at them today. We had longer meetings than I like, too. For them to take it in and play good, I commend the players."

Patrick Kane and Sam Lafferty scored for the Blackhawks (14-28-4), who lost their second in a row following a three-game win streak. Petr Mrazek made 43 saves.

"We knew they were going to come out really hard, new coach and everything," Lafferty said. "I thought we weathered it for a bit and had some pushback, just not quite enough in the third."

Vancouver defenseman Quinn Hughes sent the puck up ice, and Brock Boeser tried to bank in a shot from a sharp angle. Mrazek stopped the puck but Joshua chipped it over the sprawled goalie for a 3-2 lead at 11:34.

After the following faceoff, Mrazek stopped Conor Garland’s shot before Dries directed in the rebound with a shot from between his legs.

Dries said it’s been an emotional few days as the popular Boudreau awaited his fate.

"We have to make changes in here, too," Dries said. "It starts with each guy, challenging each guy every night and in practice."

Kuzmenko scored his 20th and 21st goals in the second period to tie it 2-all after 40 minutes.

Tocchet saw plenty of things he liked in the win but knows plenty of work remains.

NOTES: Tocchet, also a head coach with Tampa Bay from 2008-10, had one practice and one game-day skate to prepare for the Blackhawks. ... Vancouver failed to score on a four-minute power play early in the first period when Chicago’s Seth Jones was called for high-sticking. … Chicago center Max Domi was assessed an instigation minor, fighting major and 10-minute misconduct for a fight with Joshua at 8:13 of the second period. ... Blackhawks forward Tyler Johnson, who had 14 points in 22 games, has been placed on injured reserve after aggravating a left ankle injury.

Blackhawks: At Calgary on Thursday night.

Canucks: At Seattle on Wednesday night.