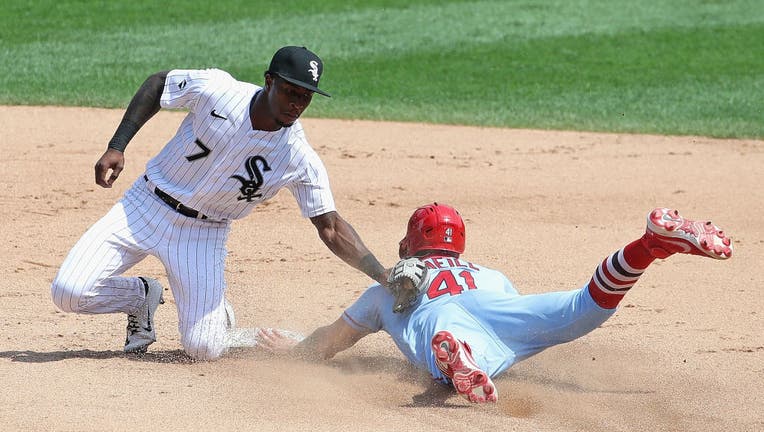 Tyler O'Neill #41 of the St. Louis Cardinals is caught stealing by Tim Anderson #7 of the Chicago White Sox in the 5th inning at Guaranteed Rate Field on August 15, 2020 in Chicago. (Photo by Jonathan Daniel/Getty Images)

CHICAGO - Paul Goldschmidt and Tyler O’Neill homered, and St. Louis beat the Chicago White Sox 6-3 on Saturday for a doubleheader sweep in the Cardinals’ long-awaited return from a coronavirus outbreak.

Playing for the first time since July 29, St. Louis used solid performances by Dexter Fowler and Adam Wainwright to post a 5-1 victory in Game 1. Then it battered Chicago’s bullpen in the second seven-inning game — part of shortened doubleheaders in the pandemic-delayed season.

The reigning NL Central champions improved to 4-3 with the sweep. Every other team in the majors had played at least 13 games coming into the day.

Trailing 3-1 heading into the fifth, the Cardinals went ahead to stay with a four-run rally. Goldschmidt hit an RBI single off Evan Marshall (0-1) before O’Neill belted a tiebreaking drive to left for his third homer.

Max Schrock and top prospect Dylan Carlson each got their first major league hit in the inning. Alex Reyes (1-0) worked a scoreless fifth for his first win since 2016, and Andrew Miller got three outs for his first save of the season.

Eloy Jiménez and Luis Robert homered for Chicago in the second game, but the White Sox had just six hits on the day. Lucas Giolito (1-2) allowed five runs, four earned, and six hits in five innings in the opener.

Wainwright (2-0) also recorded the team’s previous win, beating Pittsburgh 9-1 on July 25. The Cardinals then dropped three in a row before a coronavirus outbreak shook up their roster and coaching staff, leaving them idle for weeks and resulting in 18 confirmed cases in the organization.

“A lot of things are different but for me, when I step on the mound ... at the end of the day, it’s still a 1-on-1 competition,” Wainwright said.

Wainwright, who turns 39 on Aug. 30, didn’t look rusty at all. The right-hander allowed one run and two hits, struck out three and walked three in his second start of the year.

“Each pitch was all about expecting it to be great and not falling victim to excuses,” he said. “The team that I was playing with today and the team I was playing against cares nothing about how long we’ve been out or whatever.”

The White Sox never recovered after Giolito got off to a shaky start.

“We weren’t able to do a whole lot against Adam Wainwright,” manager Rick Reneria said, “very polished, very experienced quality pitcher who obviously as everyone sees, the down time had no effect on him.”

With one out and runners on first and second in the first, Giolito hit O’Neill and Matt Carpenter to force home a run. Carlson then struck out in his major league debut, but Fowler followed with a two-run single and Andrew Knizner singled in Carpenter to give St. Louis a 4-0 lead.

The Cardinals almost got another run in the first, but Fowler was cut down at home when he tried to score on Harrison Bader’s base hit.

Giolito had looked good of late, going 1-0 with a 1.89 ERA over his previous three starts.

“It got better after the first inning, but it has to be better in the first,” Giolito said. “I can’t put us in a hole there.”

Cardinals: LHP Austin Gomber was placed on the injured list. Gomber has not tested positive for COVID-19, but came up as a potential concern in contact tracing.

White Sox: RHP Reynaldo López (shoulder soreness) threw Friday and is scheduled for another session Monday. “He threw well yesterday,” Renteria said. “All indications are he had a nice day.” ... Reliever Ian Hamilton was placed on the 10-day injured list because of a sore right shoulder, and utilityman Leury García (sprained left thumb) was transferred to the 45-day injured list. Renteria said García had an MRI that showed a severed ligament, requiring surgery. “Looks like October would be the potential return for him,” Renteria said.