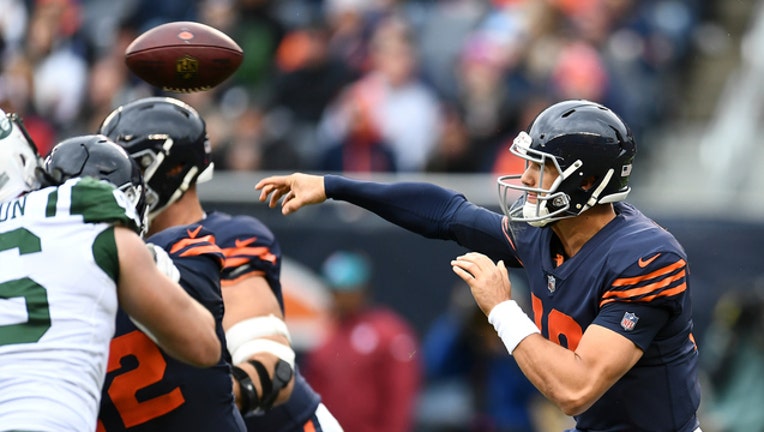 CHICAGO, IL - OCTOBER 28: Quarterback Mitchell Trubisky #10 of the Chicago Bears throws the football in the second quarter against the New York Jets at Soldier Field on October 28, 2018 in Chicago, Illinois. (Photo by Stacy Revere/Getty Images)

The Bears (4-3) got the win they needed after dropping two in a row to fall out of the NFC North lead, even though star pass rusher Khalil Mack (right ankle) and No. 1 receiver Allen Robinson (groin) missed the game.

Trubisky was shaky but did enough to help the Bears come out on top. He connected with Tarik Cohen for a 70-yard touchdown on a screen in the first quarter and threw a 4-yard scoring pass to Anthony Miller in the third, making it 14-3. But the second-year pro was wild again after struggling with his control against New England the previous week.

Cohen's lone reception was the big touchdown. He also ran for 40 yards on five carries.

Jordan Howard ran for 81 yards and a touchdown. He scored from the 2 to make it 24-10 midway through the fourth quarter, sealing the win after tight losses to Miami and the Patriots.

But guard Kyle Long had to be helped off the field with a right leg injury in the closing minutes. Tight end Dion Sims rolled into him as the two were blocking for Howard on a run.

Coming off his worst game as a pro with three interceptions, Darnold was 14 of 29 for a career-low 153 yards in his eighth NFL start. On the plus side, he did not throw an interception after getting picked off three times last week.

Chicago grabbed a 7-0 lead in the first quarter when Cohen turned a screen from Trubisky against an all-out blitz into a 70-yard touchdown. It was the longest play from scrimmage by the Bears this season.

New York's Jason Myers kicked a 42-yard field goal early in the second quarter to make it a four-point game.

It stayed that way until Miller caught a 4-yard pass in the back of the end zone from Trubisky midway through the third to make it 14-3. He kept his feet in bounds as he fell backward with New York's Buster Skrine defending him.

A short punt by Lachlan Edwards then gave Chicago possession at midfield. Trubisky converted on fourth-and-1 at the 23, and Cody Parkey made it 17-3 with a 32-yard field goal to start the fourth.

The Jets then went 75 yards, with Darnold throwing a 16-yard TD to Chris Herndon. But Howard then scored from the 2 after breaking off a season-high 24-yard run to the 6 on Chicago's next possession, making it 24-10.