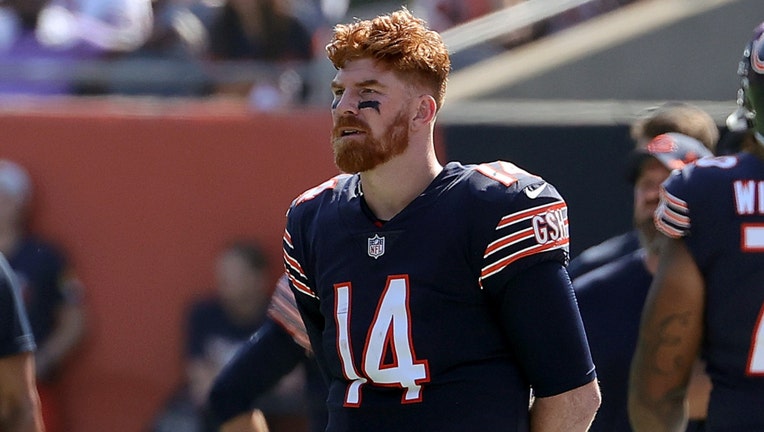 Quarterback Andy Dalton of the Chicago Bears on the sidelines after being injuring in the game against the Cincinnati Bengals at Soldier Field on September 19, 2021 in Chicago, Illinois. (Jonathan Daniel/Getty Images / Getty Images)

LAKE FOREST, Ill. - Quarterback Andy Dalton will be making his second straight start Sunday for the Chicago Bears as a result of Justin Fields’ broken ribs.

The Bears face the Arizona Cardinals at Soldier Field, and on Friday coach Matt Nagy said Fields’ health improved, but not enough to play. Fields is doubtful for the game.

"Justin is making good progress, just not there medically for the clearance," Nagy said.

Nick Foles will be the backup quarterback behind Dalton. Nagy is hopeful Fields can return soon.

"I think progress is definitely the good word for him," Nagy said. "Being able to get out there in practice and throw the ball around and get used to doing the common stuff that you do, and now the biggest thing for him is just going to being able to understand, probably more than anything, just the pain management of how things feel.

"We’re obviously not going to go out there and hit him while he’s running around in practice and see. So it’s going to be a constant communication between him, our trainers, myself, just to how he’s feeling and how everything is going."

Fields practiced all week but only on a limited basis after missing the 16-14 Thanksgiving Day win over Detroit.

For Dalton, it’s been a rare week of preparing to face an opponent as a starter. Last week the Bears held no actual practices, only lighter walk-throughs because they had only three days in between their loss to Baltimore on Nov. 21 and the Thanksgiving Day game.

"You get full-speed reps, I think that’s important," Dalton said. "And so last week, most of the stuff was walk-through and everything, so it’s good to have a full week of preparation going into it."

Dalton is unlikely to have wide receiver Allen Robinson available as a target. Robinson is doubtful after missing the previous two games with a hamstring injury suffered against Pittsburgh Nov. 8.

The Bears will be without defensive end Akiem Hicks (ankle) and running back Damien Williams (calf). All have been ruled out for the game. Linebacker Roquan Smith (hamstring) is questionable.

Wide receiver Damiere Byrd stepped up against Detroit for four receptions after making five total for the first 10 games, and will take on a bigger role with Robinson and Marquise Goodwin (foot) both likely to be gone.

"He’s been here from the beginning, and he’s done a good job for us," Dalton said. "He made some big plays for us last week as well. With having some different guys in there and different things, we just make sure we’re communicating well, making sure everybody’s on the same page and trust our guys to get the job done."

In the one start and half a game since Fields’ injury, Dalton has gone 35 of 62 for 518 yards with three touchdowns, an interception and a passer rating of 93.35.

One other item of positive Bears injury news is Nagy announced rookie tackle Teven Jenkins is being activated from injured reserve. The second-round draft pick, chosen No. 39 overall, has been out all season after undergoing back surgery.