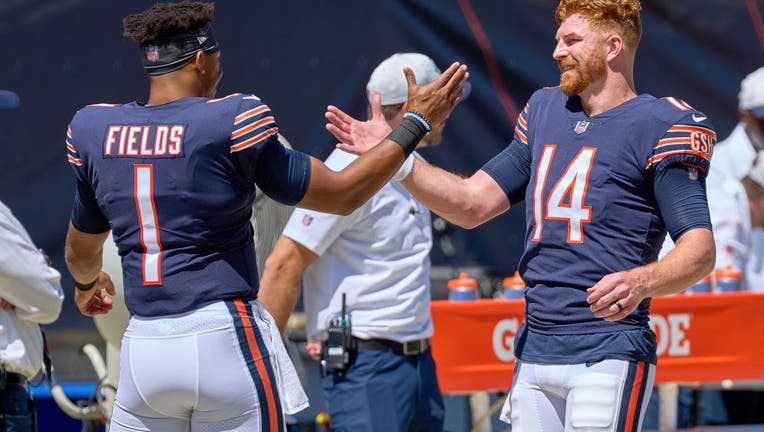 LAKE FOREST, Ill. - The Chicago Bears will start rookie quarterback Justin Fields in the preseason finale Saturday in Tennessee against the Titans.

"I prepare the same," Fields said. "I’m just going to approach it the same way and just go out there and play my hardest."

Although Fields is starting that game, he still is regarded as the Bears’ backup to veteran Andy Dalton for the regular-season opener against the Los Angeles Rams on Sept. 12.

"All I want to see from him is just play a good game of football at the quarterback position and again keep the big picture in mind for all of us," Bears coach Matt Nagy said of Fields before practice Tuesday.

Fields will play with some but not all of the offensive starters. Nagy said he’s leaning toward giving the former Ohio State star the chance to play with the Bears’ first-team offensive line, but the receivers could be a mix of reserves and starters.

"I think it’s going to be a good opportunity for him and then you know we’ll be selective across the board for the other players as we go, but you’re going to see a direction of more kind of like the old-school fourth preseason game for that," Nagy said.

The coach made it clear that Saturday’s start was not intended to see if Fields should get the nod for the opener. The decision already has been made to go with Dalton.

Fields, who was drafted 11th overall after the Bears traded up in the first round to take the Heisman finalist, is expected to play the first half Saturday, according to Nagy.

"I think that’s one of the biggest parts, just playing, finding that rhythm," Fields said. "I’m going to approach this game like I approached the last two games. Just getting in the game, moving the ball down the field and trying to score a touchdown every drive."

Nagy said Fields’ next action after the preseason is almost entirely contingent upon how Dalton performs in the regular season.

"We’ll see, but I would say yeah, big picture when we talked about this from the very start, we said whoever is going to be best for the Chicago Bears and that’s going to obviously deal with production and wins, right?" Nagy said. "So when you look at this thing, you want to make sure we all support each other with one common goal to win, and offensively to score touchdowns.

"And Andy knows that, Andy is well aware of that. Andy’s excited for the opportunity to show what he can do with these starters and in this offense."

After that game, players will be evaluated daily, the coach said.

Dalton started the preseason opener, a 20-13 victory over Miami, and last week’s 41-15 loss at home to Buffalo.

Fields leads the Bears in the preseason with 79 rushing yards. He is 23 of 39 passing for 222 yards with a touchdown and an 83.5 passer rating.

"Of course, there was some good plays and some bad plays," Fields said. "So we’ve just talked about those good and bad plays and saw what we needed to work on and just the little things, shooting ourselves in the foot and things like that."

A big concern for the Bears will be the pass blocking for Fields, whose helmet was knocked off on a sack following a blitz against Buffalo. The Bears will get 39-year-old veteran tackle Jason Peters on the field for this game to mix in with Elijah Wilkinson and Larry Borom on the left side.