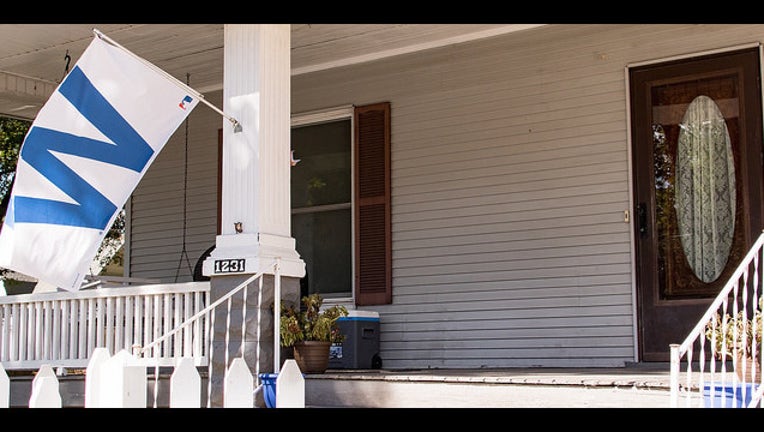 CHICAGO (AP) — There is no bright, red "C," no likeness of a cute little bear cub.

But when the National League Championship Series shifts to Chicago for Game 3 on Tuesday night, there will be no more prominent symbol of the hometown Cubs than the simple white flags bearing a bold, blue W. Every sports fan knows W stands for win, and the Cubs could use one, down 0-2 to the New York Mets in their best-of-seven series. The flags will be everywhere.

The motto "Fly the W" has been pushed on social media by the team and the flags are easy to see around the Second City, hanging from the windows of houses, apartments and bars, or flapping away on car antennas. They're all over the Internet, including a doctored photograph that shows a giant W flag hanging from the St. Louis arch. The Cubs say #FlyTheW has popped up more than 620,000 times since the postseason began; the day before the wild card game against Pittsburgh, the hashtag was being tweeted better than once every second at one point.

This is not a new marketing gimmick: The flag has been around for decades and it has been purchased by Cubs fans far beyond Chicago.

Around the end of World War I, the Wrigley family that owned the team also owned the Wilmington Transportation Co., whose passengers included Cubs players. They traveled on two steam ships and later a plane from California to Catalina Island at a time when the Cubs held spring training there.

"The logo was a blue flag with a white W on it," Cubs historian Ed Hartig said.

About two decades later, in 1937, the W came to Chicago. When the Cubs erected the famous scoreboard, somebody — Hartig assumes it was the scoreboard's designer — thought the flagpole above the scoreboard could be used to signal passengers on the nearby elevated trains how the Cubs had done that day.

When the Cubs won, the team would hoist a blue flag with a white W. When they lost, a white flag with a blue L would fly. The team also installed two lights on top of the scoreboard.

"If you came by at night and the light was turned on the left field side, it was a win. A light on the right field sign was a loss," Hartig said.

According to the Cubs, the colors were reversed in the early 1980s and the team started flying a white flag with a blue W after a win and a blue flag with a white L on it after a loss.

It's not clear exactly when the flags started to be sold. The popularity of the flags has ebbed and flowed with the fortunes of the team. The last time the Cubs made it to the postseason, in 2008, sales skyrocketed.

"We were making W flags as fast as possible," said " Daniel Schack, vice president of sales at Rico Industries, the suburban Chicago company that manufactures the flags licensed by Major League Baseball.

"If they lose it will stop," said Don Strom of Advertising Flag Co. in Chicago. "We under bought because of past seasons what's happened with both the Cubs and the (White) Sox."

But Strom's company has every eventuality covered if the Cubs fall short.

"We make the L flags," he said. "South Side Chicago Sox fans are the ones purchasing those."