White Sox season over after falling to Astros in Game 4

The Chicago White Sox have been eliminated from the playoffs.

CHICAGO - The Chicago White Sox had their sights set on advancing in the playoffs after running away with the AL Central.

Stacked with stars and led by Hall of Fame manager Tony La Russa, another early exit wasn’t what they envisioned.

Chicago’s season came to an emphatic end Tuesday, with a 10-1 loss to AL West champion Houston in Game 4 of a Division Series that wasn’t close.

They never got the pitching and only occasionally got the hitting that carried them to their first division championship in 13 years and gave them back-to-back playoff appearances for the first time. And after getting knocked out by Oakland in the wild-card round last year, they bowed out in humbling fashion against the Astros.

Not what owner Jerry Reisndorf had in mind when he helped lure La Russa out of retirement, raising more than a few eyebrows by replacing Rick Renteria.

There were big questions about how the old-school, three-time World Series champion would relate to Chicago’s fun-loving young stars like Tim Anderson after a decade away from the dugout.

It wasn’t exactly smooth sailing, either. And it’s not clear if La Russa will return next season.

"I’m not gonna talk about myself," he said. "The process I’ve used once I had a little security — probably about the fifth or sixth year — is ‘do they want you back?’ I just leave if they don’t want you back. They say yes, then you ask the players. They should choose who they want to manage. If you get both of those, then you check yourself."

La Russa had a public disagreement with a couple of his players after he scolded Yermín Mercedes for homering on a 3-0 pitch during the ninth inning of a 16-4 victory over Minnesota in May.

Otherwise, the White Sox looked like a contender all year, boasting a top-notch lineup and pitching staff.

Until they ran into the October-proven Astros.

The White Sox got outscored 15-5 and didn’t even get an extra-base hit while dropping the first two games in Houston. The team with the best home record in the American League took Game 3 at Guaranteed Rate Field 12-6, only to get eliminated in its own ballpark. 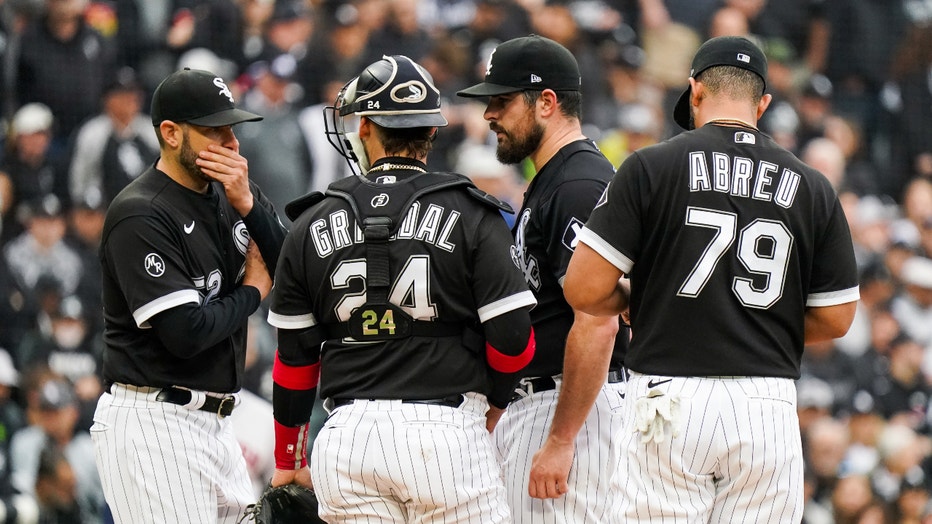 The White Sox were banking on Carlos Rodón to help send the series back to Houston for a decisive fifth game. The left-hander — limited down the stretch by an achy shoulder — brought the heat early on, only to fizzle quickly and exit in the third inning.

Rodón gave up a double to Jose Altuve on the game’s first pitch, then seemed to settle in. He retired the next three batters, striking out Alex Bregman and Yordan Alvarez on 99 mph fastballs to end the threat.

Rodón pitched around a leadoff single by Carlos Correa in the second. But he hit Altuve in the third, one of the few times the crowd of 40,170 cheered during the game, and issued back-to-back walks to Bregman and Alvarez to load the bases with two out.

Correa then chased Rodón with a two-run double to put Houston on top 2-1, and the White Sox never really recovered.

It was a rough end for Chicago after going 93-69 and beating Cleveland by 13 games in the division. The White Sox finished with their highest win total since the 2005 World Series championship team went 99-63, even though key players such as Luis Robert and Eloy Jiménez missed time with injuries.

Rodón made his first All-Star team and set a career high in wins, going 13-5 with a 2.37 ERA. But with an expiring contract, he’s looking at an uncertain futre.

Rodón, who has a history of arm and shoulder injuries, threw just 28 innings over the final two months of the regular season.

The White Sox also didn’t get the starts they hoped for from Lance Lynn, Lucas Giolito or Dylan Cease in the playoffs. And now, their season is over.