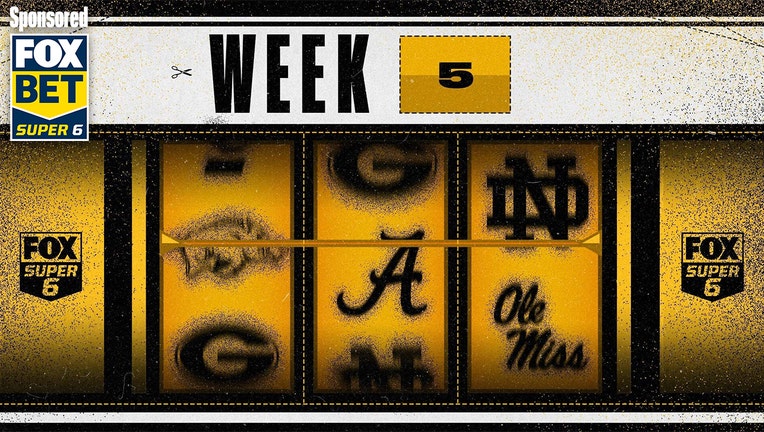 And for those who play FOX’s Super 6 during our college football Saturday, you could help build the jackpot this week.

Welcome to the first week of FOX Bet’s "Stack The Cash" College Football contest on Super 6. The more entries that come into the pot on our six college football games, the larger the jackpot grows. On Thursday afternoon, that jackpot was closing in on $90,000 with more sure to come as the entries file in.

It makes the "Stack the Cash" promotion a fun way to get your friends and family involved, too – after all, if you invite them to play, you all have a chance to win even bigger!

Speaking of big, just how big a weekend is it? Super big, with five marquee matchups!

There’s Michigan vs. Wisconsin in the Big Noon Saturday contest at Camp Randall. There's the Brian Kelly Bowl – Cincinnati at Notre Dame. Arkansas will try its hand between the hedges vs. No. 2 Georgia. Lane Kiffin and Ole Miss will attempt to knock off Alabama. And Oklahoma and Kansas State matchup up in the Little Apple of Manhattan, Kansas.

And there is no better time to play FOX Bet Super 6 – it's free, it's fun and you can help "Stack The Cash" and build the jackpot. Just download the FOX Bet Super 6 app on your phone or tablet and do your part!

Here are Saturday’s games, with some notes on each.

A battle of bad history highlights this one. Michigan hasn’t won at Camp Randall since 2001 – a stretch of five straight losses. The Wolverines have been awful as underdogs under Jim Harbaugh, going 0-for-11.

Meanwhile, Wisconsin has lost seven straight against Top 25 teams, including crumbling like a cookie against Notre Dame last Saturday in Chicago. Graham Mertz has been a turnover machine, throwing six picks for the Badgers against only one touchdown. In contrast, Cade McNamara and Blake Corum have the Wolverines' offense clicking during a 4-0 start.

If the Wolverines win this, they'll be right in the conversation with Penn State, Iowa and Ohio State for the Big Ten title.

Georgia as a top-five team was an entirely believable scenario before the year. Arkansas being in the top 10? Well, that’s a surprise. Yet wins over Texas and Texas A&M have the Razorbacks dreaming big. This may be their toughest stop, however, as Kirby Smart’s crew has played as well as any team in the country.

The Georgia defense has allowed just 23 points in four games (5.8 points per game). JT Daniels and the offense has the Bulldogs clicking at 42 points a night. If KJ Jefferson and Arkansas keep this close, that’s a testament to where they are as a program. But they aren’t there yet.

There are a bunch of subplots in this one. Cincinnati looks to make its strongest national statement, against the head coach who walked away from them 12 years ago. Desmond Ridder has thrown seven touchdowns, and Jerome Ford has six rushing touchdowns for the Bearcats.

And yet, for as disappointing as Notre Dame has been to a lot of people, it's 4-0 and has improved every week. The Irish have won 26 straight under the gaze of Touchdown Jesus. Under Luke Fickell, Cincinnati is 4-8 against Top 25 opponents.

Here are the basic questions: Is Mississippi for real? If so, can Matt Corral add a signature win to his growing legacy? The Ole Miss quarterback has nine touchdowns and no picks early in the season.

But Lane Kiffin’s crew didn’t face anyone close to the Crimson Tide’s defense to this point, and Nick Saban also has a pretty good quarterback in Bryce Young. In other words, the Rebels have stepped up to the varsity.

The Sooners are still undefeated and maybe that’s all that matters. But against three teams that nobody would consider world-beaters – Tulane, Nebraska and West Virginia – the Sooners have been forced to sweat things out.

Now, they travel away from Norman for the first time against a Kansas State squad angry after losing at Oklahoma State last week. One day, Spencer Rattler and the Sooners are going to break out. I’m just not sure that Saturday is that day.

This is more of a statement game for the Cyclones, who have sandwiched a win over UNLV with losses to Iowa at home (27-17) and at Baylor (31-29). The Breece Hall show is worth watching and six touchdowns in four games for the Iowa State running back is a good number.

When in doubt, pick against Kansas.