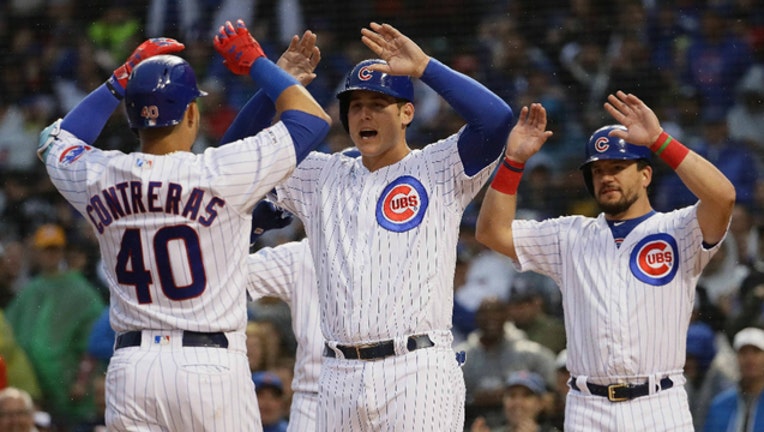 Contreras homered twice and drove in five runs, and the Chicago Cubs handed Lucas Giolito his first loss since April by downing the Chicago White Sox 7-3 on Wednesday night.

David Bote also connected to help the Cubs bounce back from a tough loss to their crosstown rivals in their first meeting of the season. Jon Lester (6-5) allowed two more homers, but worked into the sixth inning to improve to 3-1 in June.

Contreras had his sixth career multihomer game on the third anniversary of his first plate appearance in the majors, a pinch-hit drive for a two-run shot against Pittsburgh. He also cut down speedy Tim Anderson trying to steal third after he led off the fifth with a double.

"It makes me proud to look back and see how far that I've (come) and how good this team is," said Contreras, who has homered on June 19 in three of his four big league seasons.

Trying for his ninth win in a row, Giolito (10-2) showed flashes of the dominant stuff that put him in the mix to start next month's All-Star Game in Cleveland. He struck out Kris Bryant three times and fanned Kyle Schwarber twice on a rainy, windy and unseasonably cold night at Wrigley Field.

But Giolito had all sorts of trouble against Contreras.

The Cubs loaded the bases in the first on Schwarber's leadoff double and a pair of walks, and Contreras drove a 1-2 changeup into the basket in left field for his third career grand slam . The fiery Contreras yelled and motioned to the crowd as he rounded the bases after his 14th homer.

Giolito allowed a total of four runs in 29 innings over his previous four starts.

"You're not going to go out there and have a great outing every time," he said. "I'd like to control the damage better than I did tonight."

Contreras batted again with two outs in the third and sent a solo shot into the bleachers in left, giving the Cubs a 5-1 lead. He walked in the fifth before Josh Osich got the last two outs of the inning.

Giolito allowed six runs and seven hits, struck out nine and walked three in his first loss since April 6 against Seattle. The 6-foot-6 right-hander went 9-0 with a 1.67 ERA in his previous 11 starts.

"It was a tough outing for Lucas," White Sox manager Rick Renteria said. "I went and spoke to him after we got him and he just kept saying, 'I wasn't very good tonight.' It's as simple as that."

Eloy Jiménez was held in check one night after he hit a two-run homer in the ninth against his first major league organization, lifting the White Sox to a 3-1 win. The rookie slugger went 0 for 3 with a walk and scored a run.

Yoán Moncada's RBI double trimmed the Cubs' lead to 5-3 in the fourth. The White Sox had a chance for more with runners on second and third, but Lester struck out Giolito and retired García to end the inning.

Lester allowed seven hits, struck out six and walked one in 5 2/3 innings. He has given up seven homers in his last three starts.

"Our offense picked me up today," Lester said.

The Cubs designated reliever Tim Collins for assignment after the game. Top pitching prospect Adbert Alzolay will join the team Thursday in case it needs innings behind Tyler Chatwood, who is making his second start of the season.

White Sox catcher Zack Collins made his major league debut in the ninth. He walked as a pinch-hitter.

"I thought I put a good at-bat together and it was a lot of fun," said Collins, a first-round pick in the 2016 amateur draft.

White Sox: LHP Manny Bañuelos was placed on the 10-day injured list with shoulder inflammation. The team is off each of the next two Thursdays, but it will need to cover the opening in its rotation Tuesday in Boston. "We have a few days off here so we'll deal with that as we continue to move forward and see what adjustments we have to make," Renteria said. RHP Carson Fulmer was recalled from Triple-A Charlotte to take Bañuelos' spot on the roster.

Cubs: Chatwood (3-1, 3.60 ERA) gets the ball Thursday night in the opener of a four-game series against the New York Mets. He is stepping in for Kyle Hendricks, who is on the injured list with right shoulder inflammation. RHP Walker Lockett pitches for New York in his Mets debut.