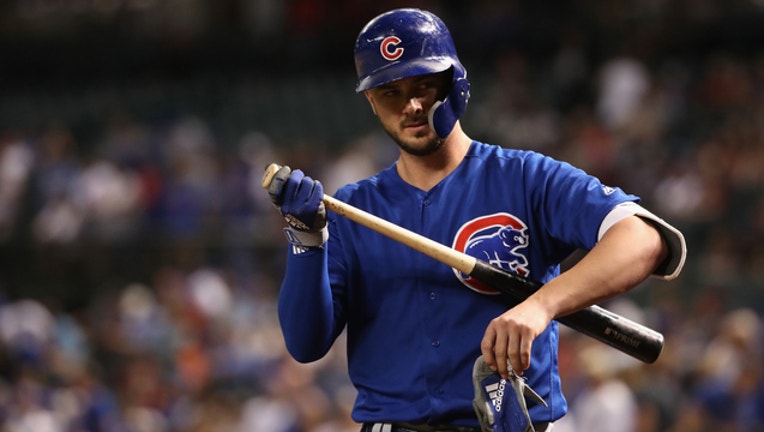 CHICAGO (AP) - Slugger Kris Bryant was back in the Chicago Cubs' lineup after missing two games because of a bruised left wrist.

The 2016 NL MVP was batting sixth and playing left field, with David Bote at third base for Friday's afternoon game against St. Louis. Bryant was hit by a pitch from Pittsburgh's Chris Archer on Tuesday.

He has had two stints on the disabled list this season because of left shoulder inflammation. The 26-year-old Bryant is batting .276 with 12 homers and 49 RBIs in 98 games, and manager Joe Maddon sees no reason why he can't be a major contributor in the postseason.

"I don't think the hand's (an issue)," Maddon said. "I think the shoulder's been rested a couple days. Yeah, I think he can be effective."

The Cubs began the day leading second-place Milwaukee by a game in the NL Central. They are headed to the playoffs for a franchise-record fourth straight year.

Maddon wasn't sure if reliever Pedro Strop (strained left hamstring) will pitch this weekend. He still feels some discomfort on the landing throwing off the mound.

The Cubs are missing their two relievers with the most saves this season. Closer Brandon Morrow, who has 22 saves, has been on the disabled list since July 19 because of an elbow injury and was shut down for the rest of the season last week. Strop, who has 13, has been sidelined since Sept. 13, when he was hurt running to first on a double-play grounder at Washington.

Chicago activated catcher Bobby Wilson, who was acquired Aug. 30 from Minnesota on Friday. The Twins placed him on the 10-day disabled list Aug. 24 because of a sprained right ankle.

Wilson hit .178 with two homers and 16 RBIs in 47 games for Minnesota this season.