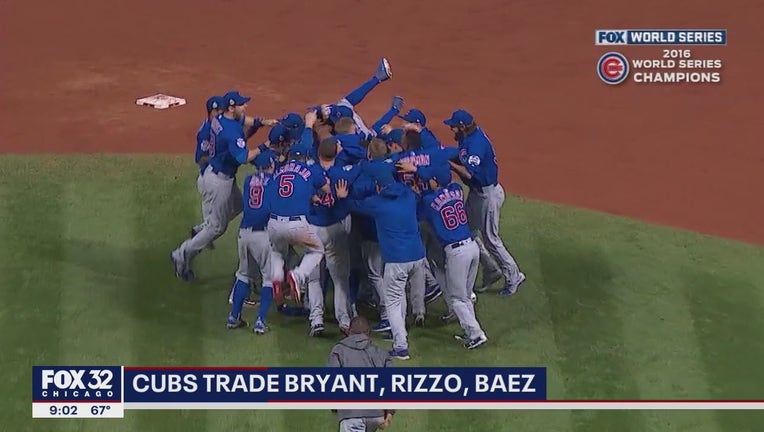 CHICAGO - Chicagoan will never forget the iconic night in 2016: the Cubs vs. the Cleveland Indians.

It was a ground ball to Kris Bryant, who threw to first baseman Anthony Rizzo.

It was the Cubs first World Series win since 1908. And on Friday, these same world champions are now traded to other teams.

"There were people that lived 100 years that never saw a World Series, so you just gotta be grateful that they did it," said Cubs fan Zach Reyes.

"It’s a really hard pill to swallow to see these guys go, the core of the championship team," said Cubs Fan Abe Contreras.

Sports World across the street from Wrigley Field was busy all day long with die hard Cubs fans trying to get their hands on a Baez or Rizzo Jersey.

"I’ve seen people cry, they’re just buying stuff, that’s the one thing they can hold on to and say hey, they’re part of Chicago history," said One of the managers, Julius Murga.

Grant Alex is probably among the first to have his own unofficial Nick Madrigal Cubs jersey.

The White Sox traded the second baseman in exchange for Craig Kimbrel.

"This is our guy from the South Side now, we gotta root for him," said Alex.

"I want to personally thank Anthony Rizzo, Javy Báez and Kris Bryant. Together they played critical roles for one of the most successful runs in Chicago Cubs history. They each secured a place in the hearts of Cubs fans everywhere."