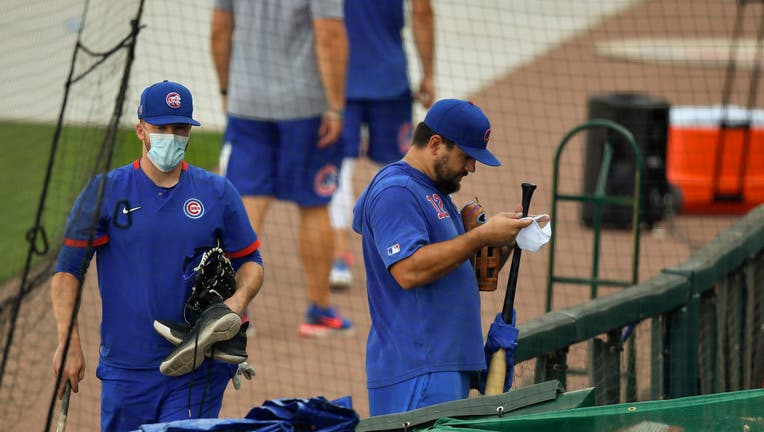 CHICAGO, ILLINOIS - JULY 03: Kyle Schwarber #12 of the Chicago Cubs puts on a face mask during summer workouts at Wrigley Field on July 03, 2020 in Chicago, Illinois. (Photo by Quinn Harris/Getty Images)

CHICAGO - To new manager David Ross, Wrigley Field looked as good as ever.

The ivy was in full bloom, and the Chicago Cubs got back to business, even if it wasn’t quite business as usual on Friday.

Lockers were spread out to allow for social distancing, Ross said. Some players even used the visitors clubhouse. Workout areas and a food station were in the concourse. No couches in the lounge.

But the Cubs were back on the field, resuming workouts for the first time since Major League Baseball shut down camps in March.

“You kind of turn into a 12-year-old thinking about baseball and how much you’ve missed it in this time,” Ross said.

Slugger Anthony Rizzo welcomed the return while acknowledging concerns he has about playing during a pandemic. The three-time All-Star overcame Hodgkin’s lymphoma in 2008.

“I’m happy to be back. Is there gonna be things that are abnormal? Absolutely, uncomfortably, yes,” he said. “I think it’s just a step in the right direction, getting back. As long as we do it as safe as possible. MLB and our union are doing the best we can to navigate the storm.”

With the season cut from 162 games to 60, the Cubs are gearing up for a sprint they hope ends in the playoffs after missing out for the first time since 2014. Chicago went from 95 wins in 2018 to 84 last season and finished behind St. Louis and Milwaukee in the NL Central.

The Cubs kept their roster largely intact. But they made one big change when they hired Ross to replace Joe Maddon.

A former catcher, he has never managed. But he was a respected leader on the Cubs’ 2016 World Series championship team.

The shutdown has presented another challenge for Ross in his first season on the bench. After a three-month layoff, the Cubs have three weeks to get ready for the opener on July 23 or 24.

“Everything’s been a challenge,” Ross said. “It’s all new. On one hand, that’s exciting to wrack your brain on how to get the most out of the guys and what you have to do. ... We had a really good vibe going in spring training and all these guys to a man staying ready is extremely rewarding as a manager.”

The Cubs got a sobering reminder about how serious the virus can be. Pitching coach Tommy Hottovy revealed this week he had a serious case of COVID-19 that left him quarantined for 30 days. He finally tested negative about two weeks ago, though he still is weakened, and went public with his harrowing ordeal on Wednesday.

“The scariest part for me watching him go through that was that moment where they’re feeling fine, tested positive, feeling fine, got a fever and then just going downhill really rapidly,” Ross said. “Watching him quarantine in his space in his house and how every time I talked to him he was in the same little room. And then there was a stretch when, early on, he was feeling really bad and he bowed out of a couple of (Zoom calls). ... When he spoke, he couldn’t get two words out without coughing. That was extremely frightening to watch and to see.”

The Cubs were dealt another blow this week when left-hander José Quintana cut his pitching thumb washing dishes at home. He had surgery Thursday to repair nerve damage, and there is no timetable on his return. The Cubs figure to know more after he starts throwing in about two weeks.

Right-hander Alec Mills could take Quintana’s spot in the rotation. The 28-year-old had a 2.75 ERA in four starts and nine appearances last season. Right-handers Adbert Alzolay and Colin Rea are also possibilities.

“Q’s a big loss, obviously,” Ross said. “That’s why he was in the rotation. But I’ve got some confidence in Alec.”

Ross was simply glad to be back at the ballpark, to see his players on the field again and to see baseball back — or almost back. He lives nearby, walks to Wrigley. And he joked people in the neighborhood are starting to recognize him by his mask and bald head.