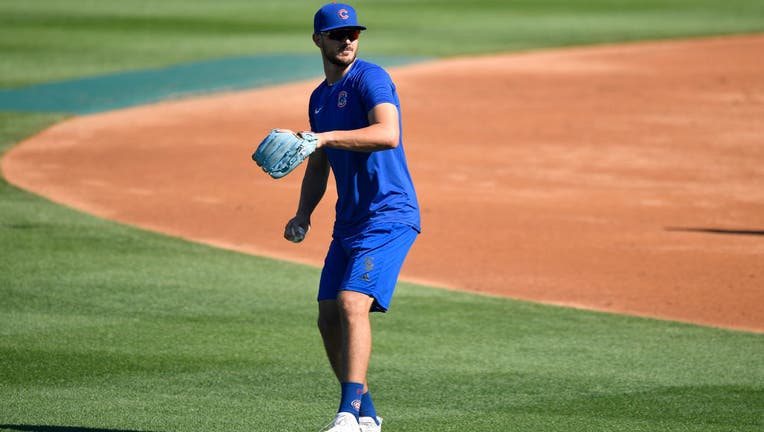 CHICAGO - Chicago Cubs star Kris Bryant is following through on his own words when it comes to the coronavirus pandemic.

Bryant returned to the starting lineup Monday against Kansas City after missing two games with a stomach ailment. The 28-year-old Bryant, who had thanked Reds second baseman Mike Moustakas after he self-reported possible coronavirus symptoms, spoke up when he himself wasn’t feeling well Saturday, and then he had to sit out while he worked his way through Major League Baseball’s pandemic protocols.

“If we can add another part to our responsibility in that if you do feel something, you know, just stay away and take it as seriously as possible,” Bryant said on a video conference call. “That’s the only way we’re going to really get through a World Series. I just think it’s important. Put your pride and egos aside. It could end up helping the rest of your teammates out, too.”

The Cubs haven’t had any positive coronavirus tests among their players since they started summer training camp a month ago. While everyone around the team acknowledges there is an element of luck to that record, they also believe the organization has done a good job with the protocols and the players have been cautious.

“I think it proves that we’re doing things right, but the last thing you want is to relax and to get too comfortable,” said outfielder Ian Happ, who serves as the team’s union representative. “I think it’s very important for us to continue on the path that we have.

“I think the one thing that kind of resonates and that we keep saying to each other is you have to treat everybody like they have it, no matter if it’s your teammate, who you know exactly what they’ve been doing for the last 10 days, or if it’s somebody you see on the street.”

Bryant was leading off and playing left field for the first of four straight games against the Royals. The 2016 NL MVP is off to a tough start, batting .120 (3 for 25) in his first six games, but first-year manager David Ross said he isn’t concerned.

“When you’re talking about star players that have track records, I try to think about, just look back on how many at-bats has he actually had and where the misses are,” Ross said. “It’s still so early for him with limited at-bats and limited playing time.”