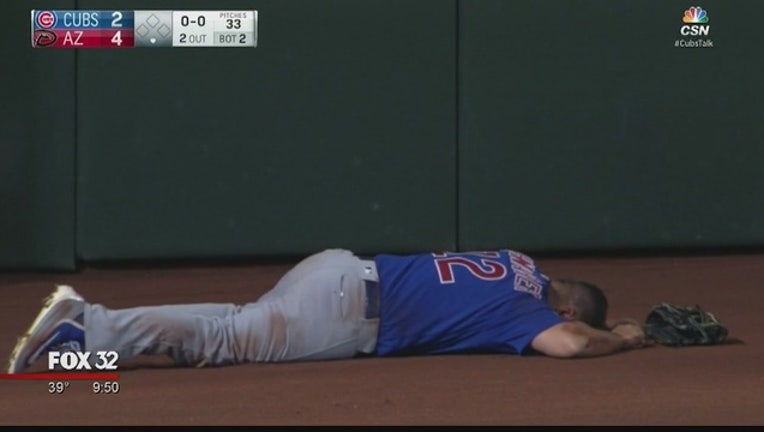 PHOENIX (AP) - Chicago Cubs slugger Kyle Schwarber is out for the season after tearing two knee ligaments in an outfield collision, a major setback for a team that many picked to win the World Series.

The Cubs made the startling announcement Friday, a day after the 23-year-old Schwarber was injured in a game at Arizona. An MRI revealed the injuries to his left knee and a sprained ankle. There was no immediate word on possible surgery.

"A young man in his sophomore season in the big leagues," Cubs manager Joe Maddon said, "one of the most refreshing and talented in all of major league baseball. Now to be out for the rest of the season, it's not easy."

A catcher by trade, Schwarber made his major league debut last year. He then hit a franchise-record five home runs in nine postseason games.

"He's going to be missed. I mean there's no sugarcoating. We love the guy. It's a sad day here in our locker room," Cubs catcher David Ross said.

"Freak things happen. You've got to move on. The game doesn't wait around. He doesn't want us to dwell," he said.

Schwarber was expected to produce plenty of power for a Cubs team that was a leading contender to win its first World Series championship since 1908. The Cubs were 3-0 this season going into Friday night's game against the Diamondbacks.

Schwarber was playing left field when he was hurt. He collided with center fielder Dexter Fowler and tumbled on a ball that became an inside-the-park home run for Jean Segura.

"That kid hit the ball and it's in the wrong spot, at the wrong height, the wrong trajectory, the wrong everything for us," Maddon said. "If it went over the wall, we'd all be better off."

Maddon said the Cubs have the depth and versatility to have several options in left field. Jorge Soler was in left field Friday night and will play there often, the manager said. Tommy La Stella can play in the outfield and so can second baseman Ben Zobrist and third baseman Kris Bryant.

"It's a classic validation of why we signed Dexter Fowler," Maddon said. "I know everybody was talking before the season, 'How are you going to get playing time for everybody?' It's a cruel, cruel game sometimes."

The overall fourth pick in the 2014 draft and Chicago's backup catcher, Schwarber stayed on the ground for several minutes before being helped to his feet and driven off the field in a cart.

Maddon talked to Schwarber before the Cubs played Friday night.

"I want him to understand one thing, it's all about him right now," Maddon said. "We're just concerned about him. We'll figure out a way to survive this whole moment."

"He's one of those guys that plays hard every day. That's why he got hurt because of the type of player he is," Ross said. "That's what we expect out of our teammates. We expect you to go out and sacrifice for the team. That's what he did."

Maddon said Fowler was a little sore from the collision but was back in the lineup Friday.

Infielder Munenori Kawasaki was called up from Triple-A Iowa to take Schwarber's roster spot, a move that Maddon said gives more flexibility to shift one of the regulars to the outfield at times.