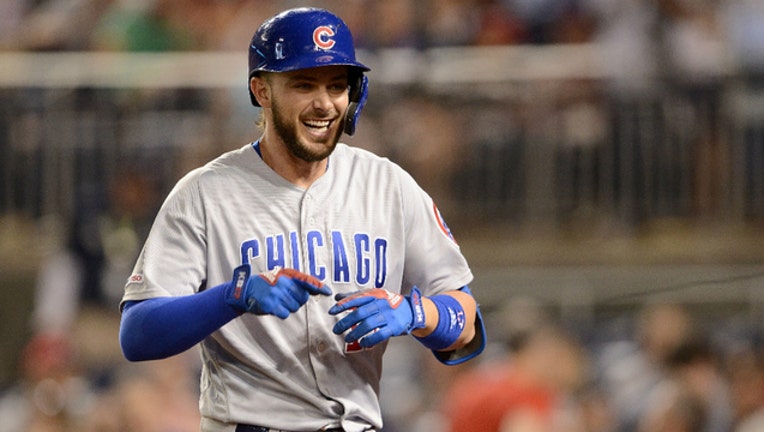 SAN FRANCISCO - Kris Bryant was the face of the Chicago Cubs for a long time.

His new bosses in San Francisco were thrilled that joining the Giants meant so much to him, despite the emotions of leaving the only major league team he’s ever known.

Bryant grew up in Las Vegas and loved to watch Giants slugger Barry Bonds — and now the versatile star will get a chance to play not only in the home run king’s former spot in left field, but all over the diamond.

The first-place Giants made a big splash just before the trade deadline Friday by acquiring Bryant from the Cubs for two minor leaguers.

"Could not be more excited to be a Giant," president of baseball operations Farhan Zaidi said. "I’ve had a number of phone calls after trades with players. Never spoken to a player more excited to be coming to a new organization."

The 29-year-old Bryant, whose NL MVP season of 2016 helped the Cubs win their first World Series title in 108 years, got word while wearing his Chicago uniform and was shown fighting emotions in the visitors’ dugout in Washington.

The Giants hoped Bryant could make it cross-country in time for Saturday afternoon’s game with the Astros at Oracle Park, though his travel plans were still being finalized as San Francisco prepared to host Houston in the series opener.

"Just feel like he’s a perfect fit for our roster, getting another middle-of-the-order right-handed bat," Zaidi said. "Given the fit, it’s been a conversation we’ve been having for a while with the Cubs."

San Francisco sought an experienced third baseman who can also play multiple positions given the club has been without Evan Longoria at the hot corner because of a sprained shoulder since June 5, when he got hurt in a collision with shortstop Brandon Crawford. Longoria is on the 60-day injured list.

Chicago received right-hander Caleb Kilian and outfielder Alexander Canario in the deal, with the Giants picking up the rest of Bryant’s hefty contract that is paying him $19.5 million this year.

The 29-year-old Bryant, who can become a free agent after this season, was one of the top position players available on the market as the disappointing Cubs sold off several stars. He is batting .267 with 18 home runs and 51 RBIs.

Bryant, a four-time All-Star, was the 2015 NL Rookie of the Year before his MVP campaign a year later.

The surprising Giants began the day with a three-game lead in the NL West over their biggest rivals, the defending World Series champion Los Angeles Dodgers.

Kapler said everyone in the clubhouse is eager to welcome Bryant.

"Today was really important for us," Kapler said. "The players, I think they’re going to get a real boost of confidence from the step we took."