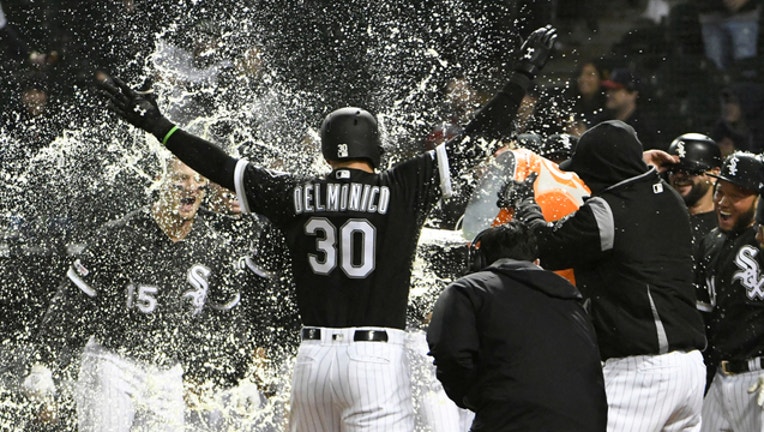 Nicky Delmonico celebrates his three run game winning home run against the Boston Red Sox during the ninth inning at Guaranteed Rate Field on May 02, 2019 in Chicago. (Photo by David Banks/Getty Images)

CHICAGO (AP) - After nearly fouling out on the first pitch he saw, Nicky Delmonico took advantage of a second chance.

Delmonico hit a three-run homer with one out in the bottom of the ninth inning to give the Chicago White Sox a 6-4 victory over the Boston Red Sox on Thursday night.

It was Chicago's second straight walk-off win. Yonder Alonso had a two-run single in the nightcap of Wednesday's doubleheader against Baltimore for a 7-6 victory.

The White Sox have won five of six to move within a game of .500 at 14-15, and things just appear to be breaking their way lately.

That certainly seemed to be the case on the pitch before the dramatic homer when Delmonico lifted a popup toward the stands along the first base line. The ball drifted and fell out of play about 2 feet from the outstretched arm of first baseman Mitch Moreland.

Chicago's rally in the ninth began with a one-out error by third baseman Rafael Devers as he charged a slow grounder by José Rondón.

"Definitely a play I should've made," Devers said through a translator. "I went after the ball aggressively and didn't come up with it."

Alonso followed with a single to put runners at the corners. Delmonico, who entered as a pinch hitter in the seventh, then drove a hanging slider from Ryan Brasier (1-1) over the fence in right-center to win it.

"I made a bad pitch and he did what he's supposed to do," Brasier said.

"I was sitting off speed," Delmonico said. "They all throw hard, but early on they're going to come at you with off speed, so I went up there looking for an off-speed pitch up I could handle."

James McCann also homered and had two hits for the White Sox.

Devers hit a sacrifice fly in the first to give Boston a 1-0 lead, but McCann answered with a two-run shot in the bottom half.

Benintendi tied the score with a leadoff homer in the third. Later in the inning, Devers had an RBI groundout.

David Price made the 3-2 lead stand up until the sixth. McCann doubled, advanced to third on an infield single by Yoán Moncada and scored on a single by Rondón to tie it.

Boston regained the lead in the seventh on an RBI groundout by Martinez.

Before Delmonico's homer, Price was in line for his second win of the season. The left-hander allowed three runs and seven hits in six innings, striking out five and walking two.

White Sox starter Lucas Giolito permitted three runs and seven hits over five innings in his first start since going on the injured list April 18 with a left hamstring strain.

Chicago shortstop Tim Anderson was selected AL player of the month for March/April. The 25-year-old Anderson became the first White Sox player to win the award since José Abreu in April 2014. Anderson batted .375 in March and April with six homers, 18 RBIs, 21 runs and 10 steals.

"Timmy has always said he wants to be the best in the league," manager Rick Renteria said. "This is probably a sign of where he's going."

Anderson went 0 for 4 with two strikeouts on Thursday.

White Sox: LHP Carlos Rodón was placed on the 10-day injured list with left elbow inflammation. Although the extent of the injury has yet to be determined, general manager Rick Hahn said Rodón will be sidelined "a little while" and Tommy John surgery is a possibility. "Over the course of the next several days or week or so, we'll come up with a specific plan," Hahn said.

Boston left-hander Chris Sale (0-5, 6.30 ERA) faces his former team in the second game of the series Friday night. Sale is 1-1 with a 4.15 ERA in two starts against Chicago. Right-hander Reynaldo López (2-3, 6.03) pitches for the White Sox after striking out a career-high 14 in his last outing.