Nikola Vucevic added 24 points and 13 rebounds, while Zach LaVine had 20 points as the Bulls beat the Bucks for just the second time in their last 19 meetings. The series now heads to Chicago for Game 3 on Friday.

The question facing the defending champion Bucks is whether they’ll be close to full strength when the series resumes. Bobby Portis left Wednesday’s game with a right eye abrasion after the first quarter and Khris Middleton exited with a sore left knee after slipping midway through the fourth quarter.

Giannis Antetokounmpo led the Bucks with 33 points, 18 rebounds and nine assists, putting him one assist from his second career playoff triple-double. Antetokounmpo increased his career postseason point total to 1,715 to overtake Kareem Abdul-Jabbar (1,692) for the most in Bucks history.

Brook Lopez had 25 points for the Bucks. Middleton scored 18 and Jrue Holiday 15.

DeRozan scored eight points during a 13-0 run that began late in the third quarter and gave the Bulls a 96-80 lead with 9:47 remaining. The Bulls still led by 15 before Milwaukee rallied in the final 7 ½ minutes.

Lopez converted a three-point play to cut Chicago’s lead to 112-109 with 56 seconds left. But after Alex Caruso and Vucevic got offensive rebounds on the Bulls’ ensuing possession, DeRozan’s driving layup made it 114-109 with 18.2 seconds remaining.

After facing an early 16-point deficit in Game 1, the Bulls started much faster this time.

The Bucks committed three turnovers in the game’s first 49 seconds and four in the first two minutes as the Bulls built an early 9-0 lead. The Bulls were ahead 29-28 at the end of a first quarter that featured six lead changes. 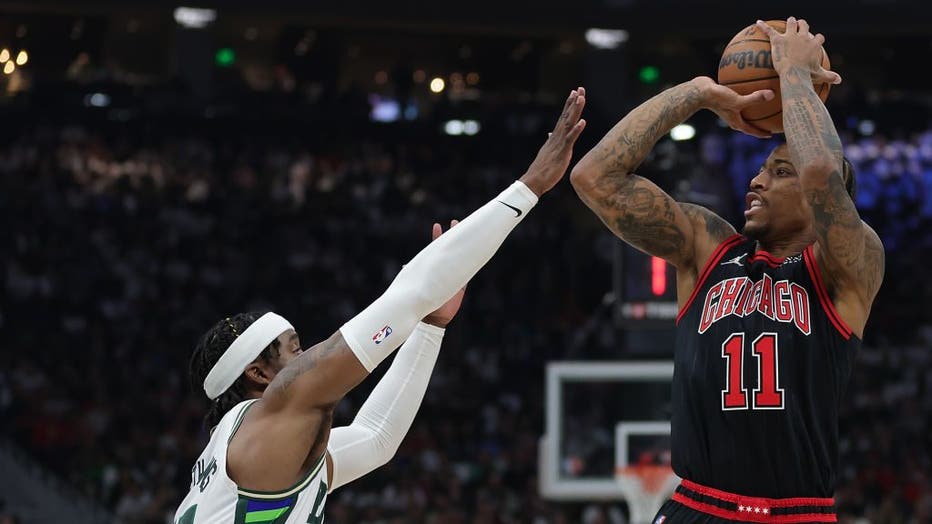 DeMar DeRozan #11 of the Chicago Bulls is defended by Wesley Matthews #23 of the Milwaukee Bucks in the second quarter during Game Two of the Eastern Conference First Round Playoffs at Fiserv Forum on April 20, 2022 in Milwaukee. (Photo by Stacy Reve

Chicago maintained a narrow lead before closing the second quarter on a 15-4 run to extend the margin to 65-49.

The Bulls extended the lead to 18 early in the third quarter, before the Bucks rallied with a small lineup featuring Antetokounmpo, Middleton and reserve guards Grayson Allen, Pat Connaughton and Jevon Carter.

Antetokounmpo led the way as the Bucks went on a 15-2 run to cut the Bulls’ lead to three late in the third period. But the Bulls responded with 13 straight points and stayed in front the reset of the way.

Bucks: George Hill missed a third straight game with an abdominal strain. Bucks coach Mike Budenholzer said before Game 2 that Hill isn’t expected back I the short term and that the team will monitor how the 35-year-old Hill guard progresses over the next "handful of days or more," ... The Bucks had 15 turnovers to increase their season total to 36.