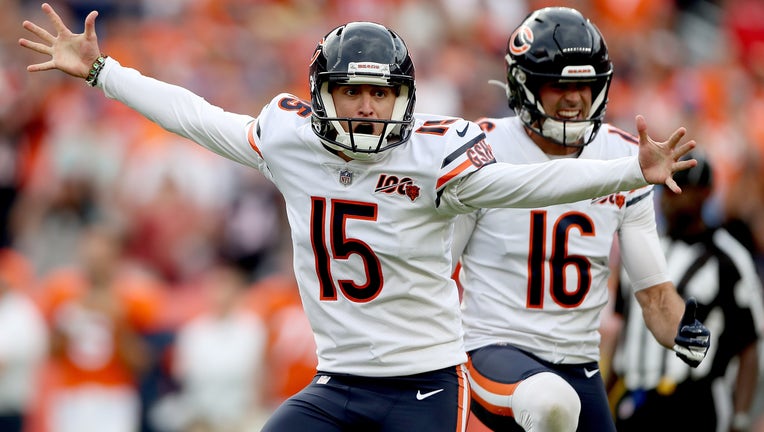 DENVER, COLORADO - SEPTEMBER 15: Pat O'Donnell #19 holds as Eddy Pineiro #15 of the Chicago Bears celebrate a 40 yard field goal in the second quarter against the Denver Broncos at Empower Field at Mile High on September 15, 2019 in Denver, Colorado.

LAKE FOREST, Ill. - It was ugly. It was gut wrenching. And it was, ultimately, a win for Chicago.

A 16-14 victory at Denver on Sunday has the Bears breathing a little easier, and they can thank their dominant defense and kicker, of all people, for that.

"What we saw yesterday was a team that was very resilient," coach Matt Nagy said on Monday.

The Bears came into the season with soaring expectations after winning the NFC North in Nagy's first year and making the playoffs for the first time since 2010.

The defense so far has looked good, containing Aaron Rodgers and the rival Green Bay Packers in a 10-3 loss at Soldier Field to open the NFL's 100th season, and delivering another solid effort against Denver. New kicker Eddy Pineiro came through on Sunday, booting the winner on the final play.

But if the Bears are going to make a deep playoff run, they need more from an offense that has struggled through two games. Quarterback Mitchell Trubisky is having a difficult time, and that has to turn around.

The Bears at least avoided an 0-2 hole that would have cast a cloud over a team with soaring expectations.

The defense continues to rank among the league's best under new coordinator Chuck Pagano after Vic Fangio left to take the head coaching job in Denver.

The Monsters of the Midway ranked fourth overall through Sunday, and were two off the NFL lead with seven sacks.

The Bears turned in a solid effort against Denver after holding Green Bay in check. Yes, the Bears gave up 372 yards and 27 first downs to the Broncos, and they appeared to lose steam down the stretch on a hot day in the high altitude. But they gave up just one touchdown.

The Bears expect to make a big jump on offense in their second season under Nagy. So far, it's not happening.

Chicago ranked 30th on offense through Sunday and has just one touchdown through two games - a 1-yard run by rookie David Montgomery in the third quarter against the Broncos.

"We know we need to be better," Nagy said. "As the season goes on, we really feel like - and we have an amount of trust in ourselves - that we as coaches and we as an offense will get going here. We feel really good that when we do get this thing going, it's going to be a lot of fun."

The Bears can maybe breathe a little easier when they send out their kicker.

Pineiro made all three attempts against the Broncos, including a 53-yarder to end the game. He also connected from 40 and 52 yards, after Nagy opted in the opener to try for a first down on fourth-and-10 rather than attempt a 51-yard field goal.

Chicago ultimately went with Pineiro - 4 for 4 on the season - after bringing in a long line of kickers in the offseason to replace the embattled Cody Parkey.

The Bears began the season looking for bigger things from quarterback Mitchell Trubisky in his third year in the league and second in Nagy's system. But he was erratic against Green Bay and no better against Denver, throwing for 120 yards on 16-of-27 passing. To be fair, he has faced two tough defenses. And facing Von Miller and Bradley Chubb was not going to be an easy task, particularly with Fangio now scheming against Chicago.

Nagy said the Bears were still determining the extent of the hand injury that knocked defensive tackle Bilal Nichols out of the game. He does not expect Nichols to go on injured reserve.