CHICAGO - Daz Cameron homered leading off the ninth to spark a three-run inning, and the Detroit Tigers closed their fifth straight losing season with a 5-2 win over the AL Central champion Chicago White Sox on Sunday.

After winning the division for the first time since 2008, the White Sox open the Division Series on Thursday at AL West champion Houston. Chicago swept the 2005 World Series, when the Astros were in the NL. This series will feature a match-up of long-time rivals Tony La Russa and Dusty Baker.

"I rarely do this, but I took a minute to explain what has been accomplished," La Russa said. "It’s very significant to win the division. There’s a lot of talk that you have to win it all, and we’re going to do our very best, but don’t let anybody diminish what we did for six months." 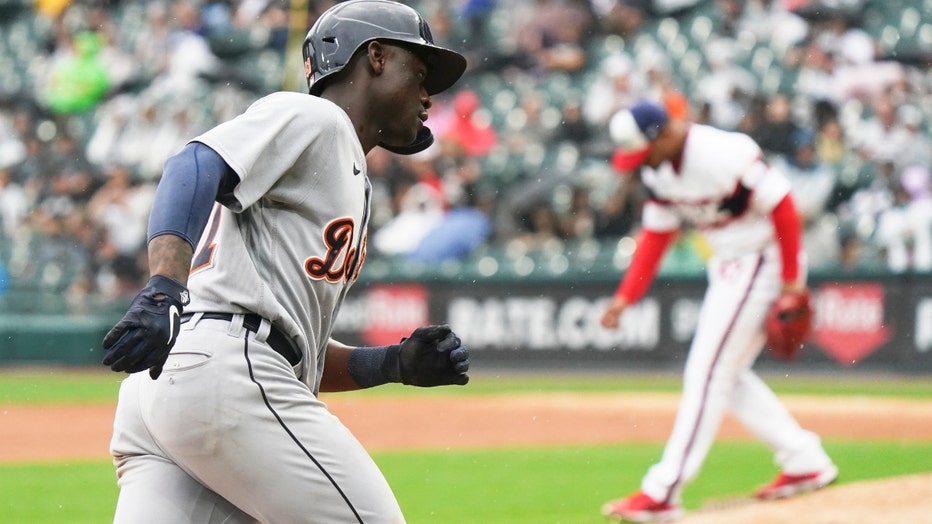 Daz Cameron of the Detroit Tigers rounds the bases following his home run off of Reynaldo Lopez of the Chicago White Sox during the ninth inning of a game at Guaranteed Rate Field on October 03, 2021 in Chicago, Illinois. The Tigers defeated the Whit (Nuccio DiNuzzo/Getty Images)

With the scored tied in the ninth, Cameron drove a 2-0 pitch from Reynaldo Lopez (4-4) over the right-field fence for his fourth homer of the season and a 3-2 lead. Two batters later, Dustin Garneau had an RBI double and Akil Baddoo caped the rally with a sacrifice fly.

Joe Jiménez (6-1) worked a scoreless eighth and Michael Fulmer got three outs for his 14th save in 18 chances.

Chicago’s José Abreu entered the game four RBIs behind the major-league lead, but was given the day off. La Russa said Abreu has been battling an illness and it didn’t make sense to push him. Abreu finished with 30 homers, 117 RBIs and a .261 batting average.

In his postgame comments, La Russa praised the Astros as a solid overall team before adding that he believes the White Sox match up well.

La Russa totally dismissed the issue when he was asked before the game whether he deserved to be voted AL Manager of the Year for leading the White Sox to a division title in his first season.

"I walked into a situation where any manager would have paid money to manage this team," La Russa said. "Every day I realize how lucky I am. It’s been an amazing experience."

"I think, in general, our guys believe they should win today," Hinch said. "Our players’ belief matters to me more than spin rate or more than an adjustment at the plate or more than base running aggressiveness. Our belief needs to be here before we can accomplish anything."

Tigers: OF Derek Hill (left knee) visited a specialist in San Francisco last week to determine whether or not he’ll need a surgical procedure. "I don’t know yet," Hinch said. "We’ll know more on Tuesday."

White Sox: LHP Carlos Rodón, who’s been bothered by shoulder soreness, will throw a bullpen on Tuesday that could determine his availability for the postseason. In his last start on Wednesday, Rodón allowed just one hit in five scoreless innings, but his fastball averaged just 90.9 mph — down significantly from his season averaged of 95.4 mph. The 28-year-old is 13-5 with a 2.37 ERA this season.