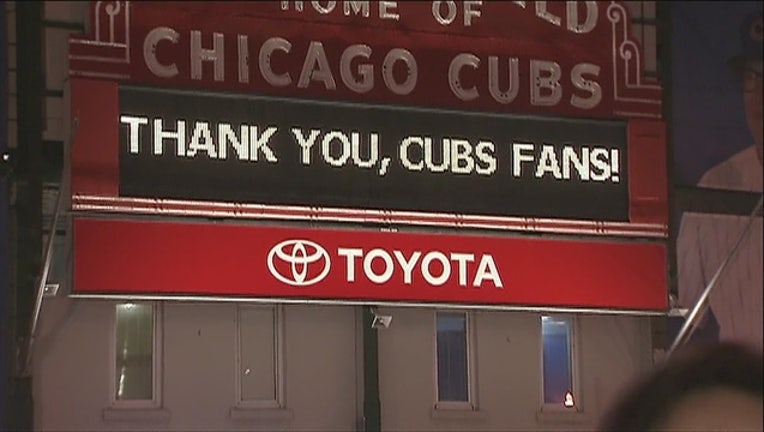 Next season can't come soon enough for the Cubs executive after Chicago wrapped up a year he described Thursday as "magical."

Yes, it was quite a ride.

The Cubs put five consecutive losing seasons behind them and emerged as one of the best teams in baseball, led by young players and veterans and a manager in Joe Maddon who pulled all the right strings in getting the franchise back in the postseason.

It ended Wednesday with the New York Mets completing a four-game sweep in the NL Championship Series, but the Cubs already believe they have what it takes to contend again next season.

"We know what we have here," All-Star rookie Kris Bryant said.

What they have is a team that often started four rookies, won 97 games and then knocked out the two teams that finished with better records — NL Central rivals St. Louis and Pittsburgh — in the playoffs. They came up short against New York's young arms, and it left a desire for more.

"We can't get to opening day fast enough," said Epstein, the club's president of baseball operations and the executive credited the most with overhauling the Cubs.

Epstein, like Maddon, would like to add pitching before the opener. That's not the only item on his to-do list. NL Cy Young candidate Jake Arrieta is eligible for arbitration and figures to get a big raise after leading the majors with 22 wins.

There are some other issues to address. Here are some things to look for as the Cubs start preparing for next season:

CONTRACT TALK: With his five-year contract expiring after next season, Epstein figures to discuss an extension this offseason with chairman Tom Ricketts. Exactly when?

"That is not anywhere near the top of the list of priorities this winter," Epstein said. "I'm sure this winter at some point we'll sit down and talk — not just about me but a lot of the guys in the front office who contribute behind the scenes and making sure this group can stay together for a while and finish what we started."

ARMS RACE: There will be plenty of speculation about David Price coming to the Cubs. The 2012 AL Cy Young Award winner would fit nicely next season at the top of the rotation alongside Jake Arrieta and Jon Lester. Don't dismiss his history with Maddon from their time together in Tampa Bay or the fact that the Cubs look like they are poised to contend for at least the next few years. Then again, the price will be high and the Cubs did give Lester a $155 million deal last offseason. Cheaper options might be John Lackey or former Cub Jeff Samardzija. A trade involving Starlin Castro and a prospect or two might be a possibility.

FRONT AND CENTER: The Cubs could have a hole to fill at the top of the order and in center field with Dexter Fowler's contract expiring. In his first season in Chicago, he wound up fourth in the NL with a career-high 102 runs despite a slow start. Epstein would love to keep Fowler, saying he made "a wonderful impression." If Fowler leaves, that could mean more playing time in the outfield for Bryant and Javier Baez.

CATCHER OR OUTFIELDER?: For a guy who began the year in Double-A, Kyle Schwarber made quite an impression with 16 homers and 43 RBIs in 69 games. In the playoffs, he set a club-record with five home runs. But he also struggled in left field in the NLCS. And the question remains — is he a catcher or an outfielder? For now, Epstein said the plan is to continue developing him at both spots.

"We're not good enough to forecast exactly how his career is going to go defensively, what position he's gonna play," Epstein said.

NEXT FOR WRIGLEY: New bleacher sections in left and right field were added this year, along with two large videoboards. That's just the start for Wrigley Field. The massive overhaul of the 101-year-old ballpark continues in the offseason with what should be some welcome changes for the club. The team is expected to move into a new, expanded clubhouse next season. Future upgrades call for moving the bullpens underneath the bleachers, more concessions and concourses, new seating and a hotel across the street, among other things.