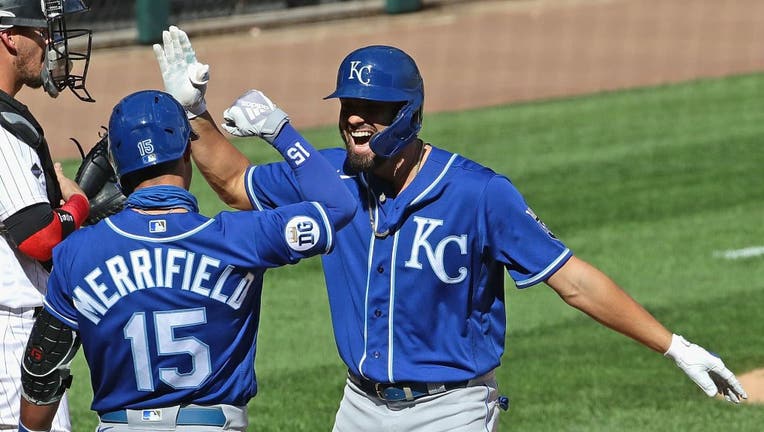 Ryan McBroom #9 of the Kansas City Royals celebrates with Whit Merrifield #15 after hitting a pinch hit home run in the 7th inning against the Chicago White Sox at Guaranteed Rate Field on August 29, 2020 in Chicago, Illinois. (Photo by Jonathan Dani

CHICAGO - Maikel Franco and Ryan McBroom homered during Kansas City’s five-run seventh, and the Royals cooled off the Chicago White Sox with a 9-6 victory on Saturday.

Ryan O’Hearn and Alex Gordon also went deep for Kansas City, which had dropped five of six — including consecutive 6-5 losses where the opponent won in its final at-bat.

The last-place Royals finalized a trade during the win, sending reliever Trevor Rosenthal to San Diego for young outfielder Edward Olivares and a player to be named. They could look to move more players ahead of Monday’s trade deadline.

Edwin Encarnación homered and Tim Anderson had four hits for the White Sox, who had won three straight and 10 of 11 to move into a tie for the AL Central lead.

Chicago has 52 homers in August, establishing a franchise record for any month. The previous record of 51 also was achieved in August 2001 and July 2003.

The White Sox rallied in the ninth, scoring three times on Anderson’s RBI double and a throwing error on reliever Ian Kennedy. But Jesse Hahn came in and struck out Yasmani Grandal and José Abreu for his first save.

Jake Newberry (1-0) pitched a scoreless sixth for the win.

Kansas City went ahead to stay in the seventh. McBroom connected against Zack Burdi (0-1) with one out, tying it at 3 and setting a Royals record with his third pinch-hit homer this season.

O’Hearn added a two-out RBI single before Franco hit a three-run drive to center for his sixth homer.

Kansas City extended its lead to 9-3 on RBI doubles by Hunter Dozier and Jorge Soler in the eighth.

After Gordon connected in the second for the Royals, the White Sox responded with Nick Madrigal’s tying RBI single in the third. Encarnación made it 3-1 with a two-run shot in the fourth.

White Sox: 3B Yoán Moncada appeared to get hurt running the bases in the ninth and exited the game. ... LHP Carlos Rodon (shoulder soreness) is scheduled to throw three innings and 60 pitches Sunday at the team’s alternate training site in Schaumburg. ... LHP Aaron Bummer (biceps strain) has started playing catch.

Left-hander Kris Bubic (0-4, 5.96 ERA) will start for the Royals on Sunday in the finale of the three-game series. The 23-year-old rookie is looking for his first major league win. The White Sox have yet to name a starter.