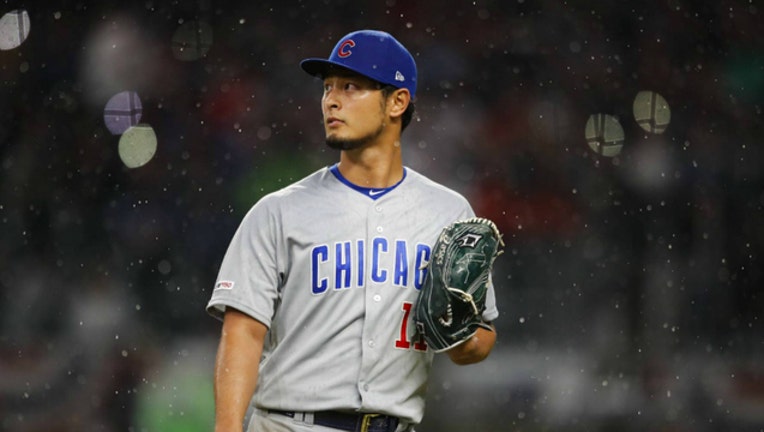 ATLANTA (AP) - Max Fried took a perfect game into the sixth inning, Nick Markakis drive in five runs with five hits and the Atlanta Braves beat Yu Darvish and the Chicago Cubs 9-4 on Thursday night to complete a three-game sweep.

Fried (1-0) made a strong bid to keep a spot in Atlanta's rotation after Kevin Gausman and Mike Foltynewicz come off the injured list. Gausman is expected to make his debut on Friday night, and Foltynewicz, the 2018 All-Star, could return in about 10 days.

Making only his 10th career start and his first this season after two scoreless relief appearances, the 25-year-old Fried recorded 17 straight outs to open the game. Mark Zagunis singled up the middle with two outs in the sixth to become Chicago's first baserunner.

Fried, a left-hander, allowed one hit with no walks and five strikeouts in six innings. The Braves led 9-0 before the Cubs scored four runs in the ninth. Anthony Rizzo hit a two-run homer and Javier Baez followed with another homer off Chad Sobotka.

A.J. Minter, making his 2019 debut after coming off the injured list, walked two batters to load the bases. Zagunis drove in a run with a groundout and Minter struck out Albert Almora Jr. to end the game.

The three-run double by Markakis was the big hit in Atlanta's five-run fifth inning that knocked Darvish (0-1) out of the game. Markakis matched his career high with three doubles and five hits.

It was a troubling series for the Cubs, who committed six errors in an 8-0 loss on Monday night and walked five batters in the eighth inning of a 6-4 loss on Wednesday night.

Darvish gave up three runs on five hits and four walks, one intentional, in four-plus innings. He has issued 11 walks in a combined 6 2/3 innings in two starts, including a career-high seven walks in only 2 2/3 innings of his first start at Texas on Saturday.

Darvish was removed after giving up a leadoff double to Ender Inciarte and a walk to Josh Donaldson in the fifth. Right-hander Carl Edwards Jr. gave up two walks and threw a wild pitch that allowed Inciarte to score from third. Tyler Chatwood, allowed the three-run double to Markakis and a run-scoring single to Dansby Swanson.

Light rain began in the second inning and continued most of the game.

Cubs: C Willson Contreras remained in the game after apparently having his left thumb jammed while tagging out Ozzie Albies in the fourth. Contreras blocked the plate, and Albies made a head-first slide into the catcher's glove.

Braves: Minter had been out with left shoulder inflammation. ... Foltynewicz (right elbow bone spur) did not allow a hit or a run in five innings of his first of two planned rehab starts with Triple-A Gwinnett.

The Braves put large get-well cards for former manager Bobby Cox at three locations for fans to sign. One of the four-foot wide cards was placed near Cox's statue outside SunTrust Park. Cox, the Hall of Fame former manager, suffered a stroke on Tuesday and remains in an Atlanta-area hospital. No details about Cox's condition have been released by his family or the team. Cox had a role in the pregame schedule before Monday night's home opener.

The Cubs will continue their nine-game road trip when they open a series at NL Central rival Milwaukee on Friday night with LHP Jose Quintana looking for his first win.

The Braves remain home to open a series against NL East rival Miami. Gausman is expected to come off the injured list for his 2019 debut after recovering from right shoulder tendinitis.