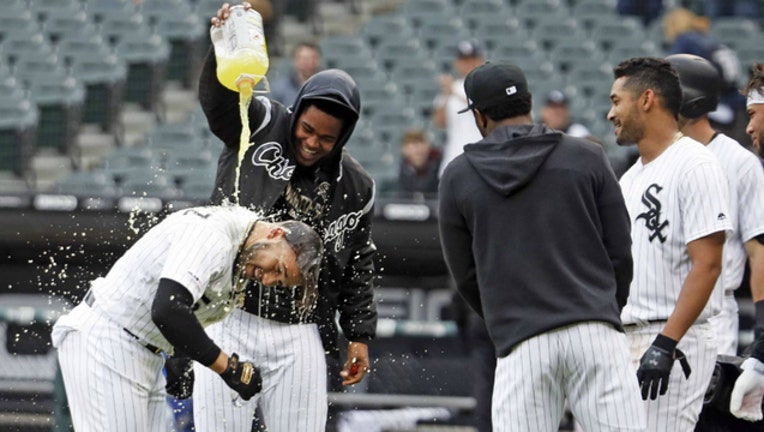 CHICAGO (AP) - CHICAGO (AP) - Lucas Giolito was behind schedule, out of sync and in a hole. Rather than unravel, he regrouped in a big way.

Giolito struck out 10 while winning his fifth straight start and the Chicago White Sox posted their second victory of the day, beating the Kansas City Royals 4-3 on Tuesday night.

Hours after Yolmer Sanchez hit an RBI single in the ninth inning to give Chicago a 2-1 win in the resumption of a suspended game, Giolito (7-1) put on quite a performance.

The right-hander gave up a three-run homer to Alex Gordon in the first, then retired 22 of his final 24 batters. Giolito allowed three hits over eight innings, matched a career high for strikeouts and improved to 6-0 in his past eight starts. In his previous outing, he threw his first career shutout, a four-hitter against Houston.

"I didn't warm up to my normal schedule," Giolito said. "I wasn't paying attention to the start time of the second game and so I was a little late. That first inning was like a continuation of my warmup, I guess you could say. Not fully locked in from the get-go."

Giolito was inadvertently preparing for the usual 7:10 p.m. start, rather than a 6:40 first pitch. That threw him off early on, but he made quite a recovery.

Alex Colome worked the ninth for his 10th save in 10 chances after getting the win earlier in the day. And the White Sox made it back-to-back victories after losing six of eight.

Brad Keller (3-6) gave up four runs and 10 hits in six innings for Kansas City. The Royals have lost nine of 12.

The White Sox tied it in the third on an RBI single by Leury Garcia and back-to-back sacrifice flies by Jose Abreu and Yonder Alonso. Charlie Tilson made it 4-3 with an RBI single in the fourth.

"Credit to (Giolito)," Whit Merrifield said. "He buckled down, made a lot of good pitches, didn't miss a lot and kept us off balance."

Getting the field into shape was quite a chore after play was stopped Monday in the bottom of the fifth with a runner on second and two outs following two long rain delays totaling about four hours.

With a handful of fans in the stands, Sanchez came through again in the ninth against Kevin McCarthy with the bases loaded.

On Monday, Sanchez hit a tying single in the fifth inning between the breaks.

Sanchez kept the crowd and his teammates entertained during the delays on Monday, doing jumping jacks on the bench. The 26-year-old second baseman also poured a beverage bucket over his head as he stood in the rain, then flapped his arms at third base to make mud angels.

Jake Diekman (0-2) hit Yonder Alonso leading off the ninth. McCarthy relieved and James McCann hit a double over Merrifield's head in right field before Tilson was intentionally walked to load the bases.

After a forceout at the plate, Sanchez lined a single to center on a 1-0 pitch for his fifth career game-ending hit. He got mobbed by teammates as he sprinted off the field.

Longtime groundskeeper Roger Bossard and his 24-person crew stayed at the ballpark until about 10:15 p.m. on Monday after 1 3/4" of rain equaling about 112,000 gallons drenched the field. They used 121 bags of quick dry - about three tons' worth. And Bossard was back at the ballpark at 7:05 a.m.

"I got to tell you, this is my 53rd year here," Bossard said. "And you know what? I've seen a lot of bad weather. Nothing like this year. It's really been amazing."

He also said crew chief Bill Miller made the correct decision to try to continue the game Monday based on the information available.

A White Sox employee of the month got to throw out a first pitch . And, to put it mildly, she was just a little bit off target. The right-hander uncorked one of the most wayward first pitches ever when she plunked a team photographer standing close by, between the mound and first base line. The ball went right off Darren Georgia's lens, nowhere near the plate. Georgia told NBC Sports Chicago he and the camera were fine. The White Sox didn't identify the woman pitcher.

The White Sox returned RHP Carson Fulmer to Triple-A Charlotte. He served as the 26th man for the scheduled game, but did not pitch.

White Sox: SS Tim Anderson (sore right wrist) was out of the lineup for the fourth straight game on Tuesday night. He did enter the suspended game to run after Alonso was hit by a pitch. ... Garcia (sore right shoulder) came in to run in the eighth inning of the suspended game and remained in center field. He then started the scheduled game after being held out of the lineup the previous two. ... The White Sox placed RHP Ryan Burr (strained right elbow capsule) on the 10-day injured list and recalled RHP José Ruiz from Triple-A Charlotte. The team said Burr will be reevaluated in two weeks.

White Sox: RHP Reynaldo López (3-5, 6.03 ERA) tries to bounce back after getting tagged for eight runs in 3 2/3 innings in a loss at Minnesota on Friday.