CHAMPAIGN, Ill. - Nancy Fahey, a Hall of Fame coach who won five national championships at the Division III level, is retiring from coaching after five seasons at Illinois.

Fahey’s announcement Friday came a day after the Illini finished a 7-20 season with a loss to Nebraska in the Big Ten women’s tournament.

"Her competitive fire is matched only by the standard of excellence she has set for herself and those around her – a combination that has produced one of the most decorated coaching careers in the history of college basketball," athletic director Josh Whitman said. "Although we were not able to win as many games at Illinois as any of us had hoped, I will always be grateful to Nancy for providing a steady, experienced hand at a time when our program needed stability and integrity."

Fahey replaced Matt Bollant, who was fired after one winning season in five years and was sued for allegedly racially abusing players. Bollant denied wrongdoing;. A university report said the claims were unfounded but paid a $375,000 settlement to be divided among the players.

Fahey had her greatest success coaching at Washington University in St. Louis and was inducted into the Women’s Basketball Hall of Fame in 2012. Washington coached there for 31 seasons and reached the NCAA Division III tournament 29 times, including 10 runs to the Final Four. She won four straight national titles from 1998-2001 and another in 2010. 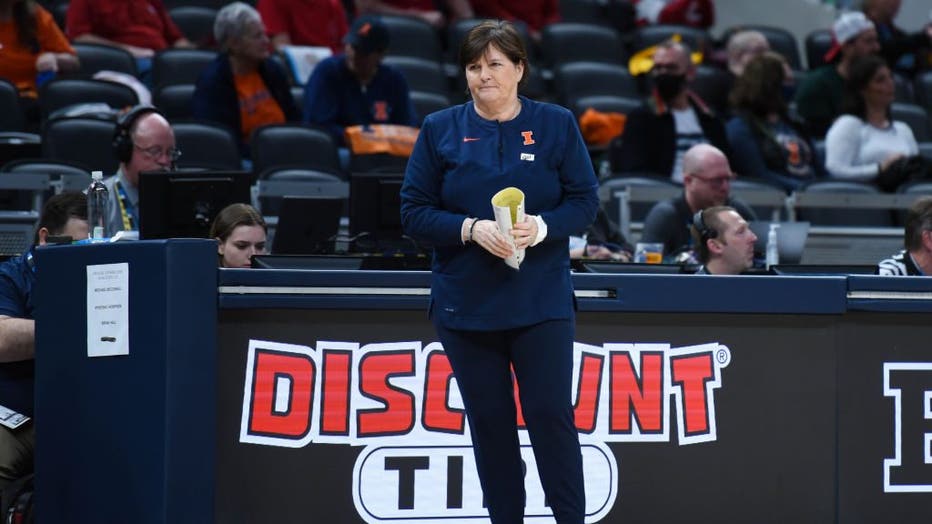 Illinois head coach Nancy Fahey during a Big Ten Tournament college basketball game between the Illinois Fighting Illini and the Wisconsin Badgers on March 2, 2022 at Gainbridge Fieldhouse in Indianapolis, IN. (Photo by James Black/Icon Sportswire vi

Over 36 years, Fahey’s teams posted 779 victories, ranking among the top 20 all-time in the NCAA record books, seventh among current NCAA Division I head coaches and ninth among all active NCAA head coaches.

After amassing a record of 737-133 at Washington, she was hired at Illinois in 2017 but never posted a winning season in Champaign. The Illini were 42-99 overall and 7-77 in Big Ten regular-season games, including 1-13 this season.

Her final two seasons with the Illini were marred by several pauses caused by COVID-19.

"I want to thank all the coaches and staff members I’ve worked with for the past 40 years, from Johnsburg High School and Washington University to the University of Illinois," Fahey said. "A special thanks to all my players who will always have a special place in my heart. I wish Illinois women’s basketball the very best in the future. I’m ready for the next chapter in my life."