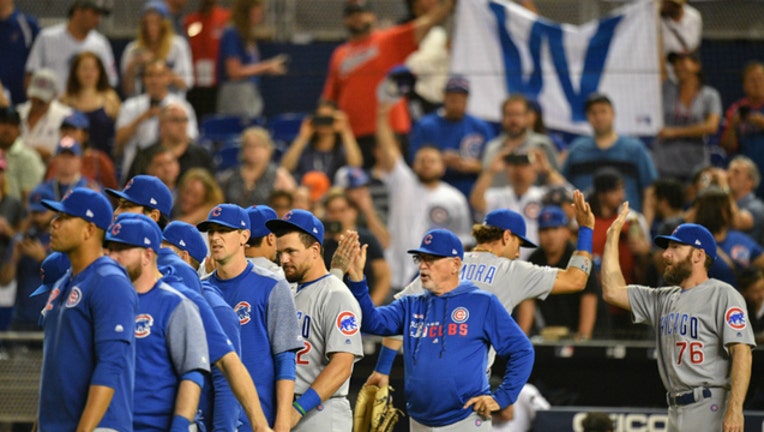 Cole Hamels pitched seven strong innings and the Cubs completed a three-game sweep of the Miami Marlins with a 6-0 win Wednesday night.

"We obviously know that we need to come in and start winning," Hamels said. "We know we're a good ball club so no matter what team we're playing, let's just go out there and win. If we keep that mentality that's how you start good win streaks. It's just

The Cubs, who won 95 games last season, entered the series with a 5-9 record and outscored the last-place Marlins 17-2 over the three games.

"That's an easy trap," said Cubs manager Joe Maddon on discounting the wins against a struggling club. "It's a major league game and I really want people to understand that it's very difficult to win a Major League Baseball game. It is. Don't ever think that it's something that you can just throw your glove out and there and can do."

"This is the lowest point we can reach," Marlins shortstop Miguel Rojas said. "We're touching under the water right now."

Hamels (3-0) allowed three hits and did not walk a batter. He struck out eight while throwing 65 of his 97 pitches for strikes.

"First of all he's having a really good time out there," Maddon said. "I love that part about him. He's got a joy to play the game of baseball. Plus he swings the bat really well. Beyond that he just attacks, attacks, attacks, and if something goes awry he doesn't change his patterns. He's such a professional."

Daniel Descalso had two hits and three RBIs, Javier Baez homered and knocked in two, and Jason Heyward also drove in a run for the Cubs, who have won five of six.

"We're playing pretty good right now," Baez said. "When our pitchers and our lineup does the job, there's nobody that can beat us."

Baez went 8 for 13 with one double, two home runs, six runs scored, and four RBIs in the series.

"He's always in the middle of everything," Maddon said. "He's just on a very similar-looking pace that he had last year. Good for him."

Hamels retired 15 consecutive batters after allowing a lead-off single to Jorge Alfaro in the second.

Martin Prado broke the string with a one-out single in the seventh, which could have ended on a potential double-play. However, third baseman Kris Bryant bobbled the ground ball hit by Brian Anderson and was unable to make a throw. Alfaro singled to left to load the bases.

Hamels got into a 3-0 hole against Starlin Castro, but worked himself out of it with a strike out and got Miguel Rojas to fly out to end the inning unscathed.

"I thought (Castro) would be aggressive with the first two pitches so I was probably trying to be a little too fine," Hamels said. "Once that happens that sort of game plan goes out of the window. I'd rather him get a base hit and earn those RBIs than opposed to giving him the free pass so it's just going out and challenging him."

Descalso started the scoring for the Cubs with a base hit in the second off Sandy Alcantara (1-2).

The Cubs scored four runs in the third sparked by a two-run double by Descalso. Baez and Heyward also had RBI singles in the inning to take a 5-0 lead.

It was Baez's 500th career hit. Baez added a solo home run, his sixth of the season, to right field in the eighth.

"As a team we're not getting it done," Marlins manager Don Mattingly said. "Pretty much period right there. That's going to have to change."

BRINSON GIVEN TIME OFF

Marlins slumping center fielder Lewis Brinson, who is hitting .194 with four RBIs in 19 games, was held out of the starting lineup, but did strike out in a pinch-hit appearance. Brinson is mired in a 1-for-22 slump with 13 strikeouts.

"He's really struggling looking at some of the stuff," Mattingly said. "We're doing some stuff with working on just seeing the baseball a little better and knowing exactly what to do up there and then we'll get it going again."

Brinson is hitting .198 with 11 home runs and 46 RBIs in 128 games with the Marlins since being acquired from the Brewers as a key piece in the Christian Yelich trade.

"We still need to be patient," Mattingly said. "We know the talent's there."

Cubs: RHP Kyle Hendricks (0-3, 5.40 ERA) looks for his first win of the season when he takes the mound on Friday to begin a three-game home series against Arizona.