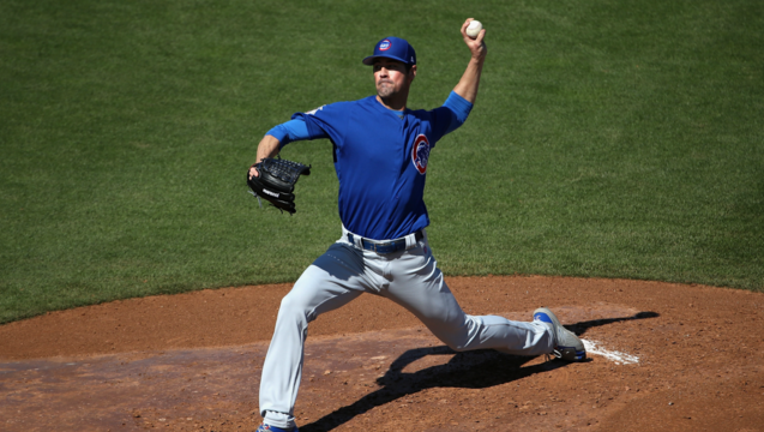 Starting pitcher Cole Hamels of the Chicago Cubs pitches during the second inning of the MLB spring training game against the Texas Rangers at Surprise Stadium on February 27, 2019 in Surprise, Arizona. (Christian Petersen/Getty Images)

DENVER (AP) - Cole Hamels struck out nine in seven scoreless innings, singled twice and drove in two runs to lead the Chicago Cubs past the Colorado Rockies 10-1 in a testy game on Wednesday.

Rockies All-Star third-baseman Nolan Arenado left in the fifth inning with a left forearm contusion after Hamels (6-2) hit him with a pitch in the third, and three more batters - including Hamels - were hit by pitches later in the game.

Chicago's Kris Bryant was hit by pitches three times in the first two games of the series.

Chicago scored five times in the second off Antonio Sentenzela (5-5).

Cooper finished a double shy of the cycle, and pulled a two-out inside fastball that was off the plate for a grand slam in the second inning against Miles Mikolas (4-7).

Kelly (7-6) struck out five before departing when Bryce Harper entered the game as a pinch-hitter. Andrew Chafin retired Harper on two pitches and Greg Holland finished the three-hitter, earning his 10th save in 11 tries.

The Diamondbacks won another series in Philadelphia and have won 11 of their last 13 road games against the Phillies.

Andrew Benintendi hit a triple and two doubles, driving in two runs for the Red Sox as they ended a three-game skid and avoided falling below .500 for the first time in more than a month.

Boston rallied against reliever Jesse Chavez (2-1) in the ninth after allowing the Rangers to tie it in the eighth on an unearned run.

Oakland went 6-4, including taking two of three from the Rays, on a season-long 10-game trip that included some significant travel issues.

Matt Olson started the decisive eighth with a single off Adam Kolarek (2-2). Laureano made it 6-2 by sending a 2-2 pitch from Colin Poche into the left-field stands.

Liam Hendriks (3-0) allowed the Rays to tie it in the seventh by allowing two inherited runners to score, but got the win.

The quick homers by Senzel and Votto off rookie Zach Plesac (1-2) marked the first time an opposing team hit consecutive homers to start a game in Cleveland in 118 years.

The Reds earned a split of the two-game series between Ohio's teams and snapped an eight-game losing streak in interleague play.

Anthony DeSclafani (3-3) made the early support stand, allowing one run and four hits in 5 2/3 innings.

Senzel and second baseman José Peraza had a frightening collision in short center field in the first. Both avoided serious injury and stayed in the game.

Lourdes Gurriel Jr. had two RBIs for the Blue Jays, who matched their run total from the previous five games combined.