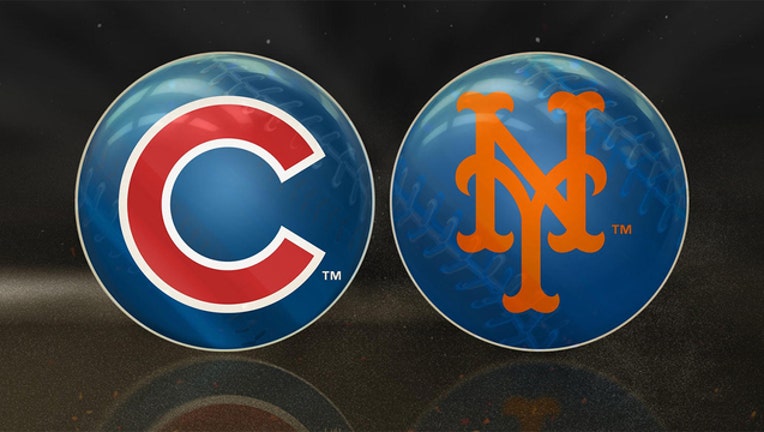 After eliminating rival St. Louis and streaking into New York with 12 wins in 13 games, the power-hitting Cubs and their young sluggers were stopped cold on a chilly night at Citi Field. Trying to end a championship drought that dates to 1908, they remained four wins from capturing their first pennant in seven decades.

Meanwhile, the Mets have a mind to make some history of their own — the kind that would break the Cubs' hearts one more tormenting time.

"If Harvey wasn't pitching, it would have looked a lot better. He was outstanding tonight," Chicago manager Joe Maddon said. "His stuff is always good, but the command was outrageous tonight."

Left fielder Yoenis Cespedes cut down a runner at the plate, and Curtis Granderson had two RBIs for New York. Travis d'Arnaud homered off the giant Mets apple in straightaway center field.

Helped by Cespedes' strong throw, Harvey struck out nine and worked into the eighth for the first time in more than two months — brushing aside all that late-season hoopla about his innings limit as his 2015 total reached 202.

"I talk to this guy every day. I know exactly what he's made of," Mets manager Terry Collins said. "He wants the baseball. ... That is not just a mask that he's putting out. This kid likes to compete."

Jeurys Familia got four outs for his third playoff save, and the NL East champs solved the wild-card Cubs for the first time all year. The Mets went 0-7 during the season series and had dropped nine in a row to Chicago overall.

New York is looking to advance to the World Series for the first time in 15 years, the longest absence in franchise history but one the Cubs and all their pained, loyal followers certainly scoff at.

Murphy connected off losing pitcher Jon Lester for his fourth homer of the playoffs and made a diving play at second base for the final out.

"I freaked out when I caught it, and then you've got to make the throw," Murphy said. "I just happened to be in the right spot."

Kyle Schwarber was the only one of those rookie boppers who showed off his prodigious power for the Cubs, hitting a mammoth homer that chased Harvey with two outs in the eighth and pulled Chicago to 4-2.

Starlin Castro had an RBI double in the fifth but was thrown out at the plate by Cespedes on Javier Baez's single.

Murphy finished off the Dodgers in the deciding game of their Division Series with an all-around offensive performance that inspired a "Mr. October" nod in a tweet from the New York original, Reggie Jackson.

Two nights later, the free agent-to-be was at it again, getting the Mets off to a rollicking start against Chicago.

"Once again, put our team behind the 8-ball against a really good pitcher," Lester said. "Just trying to get your feet wet and trying to figure out what's going on, and boom! You're down 1-0."

Murphy, who set a career high this season with 14 homers, launched another one into the second deck in right field for his fourth of the postseason. By taking Clayton Kershaw (twice), Zack Greinke and Lester deep, the 2014 All-Star has tagged $517 million worth of pitchers in these playoffs.

"He's locked in, and when he gets locked in he can do some damage offensively, and you're seeing that right now," teammate David Wright said. "It doesn't matter what they throw at him. Left-hander, right-hander. Fastballs, off-speed pitches. It's fun to watch."

It was Murphy's third homer against a left-hander in the playoffs — he had one during the regular season. And by connecting in his third consecutive postseason game, he matched a Mets record set by Donn Clendenon in 1969, the year he was World Series MVP.

"Saving the homers, I guess," Murphy joked. "If I knew what I was doing, I would have hit more homers during the regular season."

Granderson's soft RBI single on an 0-2 pitch from Lester put the Mets up 2-1 in the fifth, and d'Arnaud hit a 431-foot drive in the sixth. Juan Lagares stole third against Lester in the seventh and scored on Granderson's sacrifice fly.

With that familiar October chill in the New York air for the first time this postseason, Harvey came out firing 95-96 mph heat on a 48-degree night.

Chicago hit several line drives that were turned into outs, including one that prompted Harvey to duck quickly out of the way and another that struck him near his pitching shoulder.

But this was his game.

"The ball kind of dented my arm a little bit, got me right in the triceps," Harvey said. "It's a little bit swollen right now, but the training staff will take care of that and we'll be all set."

Cubs: Arrieta is 2-0 with a 2.45 ERA and 20 strikeouts in two playoff starts. No Cubs pitcher has won three games in one postseason. The right-hander was 2-0 with a 1.13 ERA in two outings against the Mets this season.

Mets: Syndergaard lost his major league debut 6-1 to Arrieta at Wrigley Field in May. "I remember I fell behind a few batters. Still kind of was a lot to take in. I just feel like a completely different pitcher now," Syndergaard said.