SAN DIEGO - Kyle Hendricks went as far as manager David Ross would let him. His Chicago Cubs teammates were hoping for just a little more.

Hendricks came within one out of a three-hit shutout for the Cubs, who beat the listless San Diego Padres 6-0 Monday night to snap a season-high five-game losing streak.

Manager David Ross came out to get Hendricks after he got Jurickson Profar to fly out to left on his 116th pitch. Hendricks struck out rookie José Azocar to open the ninth and walked Jake Cronenworth on six pitches before going to a full count against Profar. Scott Effros came on and retired Manny Machado.

Going out for the ninth "is always great," said Hendricks, who didn’t allow a baserunner into scoring position. "Rossy was kind of on the fence with it so I was able to talk him into it. Felt good that first hitter and then a little fatigue set in. Can’t walk somebody 6-0 right there. He’s knows that. I know that. He’s got all the trust in the world in me and I appreciate it so much.

Hendricks (2-3) continued his mastery of the Padres. He struck out seven and walked one to improve to 8-2 overall against San Diego and 5-1 at Petco Park.

The 32-year-old right-hander from Orange County allowed only three singles, including one to Machado as he extended his on-base streak to 19 games. 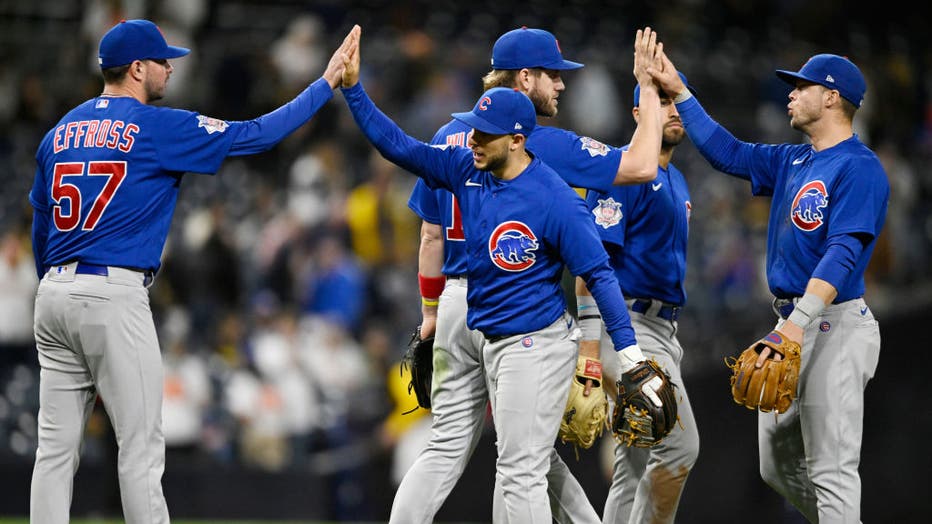 Chicago Cubs players high-five after beating the San Diego Padres 6-0 in a baseball game on May 9, 2022 at Petco Park in San Diego. (Photo by Denis Poroy/Getty Images)

"You never really want to come out no matter when it is," Hendricks said. "I also didn’t realize how high my pitch count was so it’s just good to see some of the results from the good pitches. Can’t be the focus, I have to establish what I’ve been doing and carry it over to the next start."

Ross said Hendricks "was in control pretty much every inning. Fell behind a couple of hitters there in the seventh, but it looked like the eighth was so clean, it just made a lot of sense to send him back out. He just looked really good."

Ross said Hendricks knew going out for the ninth that the manager might be out with the hook because his pitch count was so high.

"I had Scotty up for Machado, give him three batters," Ross said. "If he walks a batter, anybody gets on, if I let him face Machado, and Machado gets on, now I’ve got a sidearmer coming on. Then I’ve got to let him go and then he’s into the 130s and I’m not going to let him do that. The number’s already getting pretty high. I thought he did a spectacular job and we needed that."

Hendricks’ teammates understood Ross’ reasoning but were still pulling for the complete game.

"Absolutely," catcher Yan Gomes said. "Anytime you get your starting pitcher out there for the ninth it’s a huge deal. He gave us everything he had."

Said shortstop Nico Hoerner: "100%. I wanted it bad for him. Definitely was hoping for that double-play groundball at the end. I thought that was his last hitter.

"It’s amazing. I love watching Kyle pitch," Hoerner said. "Obviously his style of pitching isn’t common the game anymore and just incredible to see a guy with a mastery of his craft like that against not just any team, but a really strong lineup in their ballpark."

The Padres were shut out for the second time in three games. The only inning the Padres have scored in during their last three games was the ninth inning Sunday, when pinch-hitter Jorge Alfaro hit a three-run walkoff homer in a 3-2 win against the Miami Marlins.

Bob Melvin managed the game for the Padres after the team initially said he had a non-COVID gastrointestinal illness. Melvin wasn’t feeling well enough to do the post-game news conference so third base coach Matt Williams handled it. The team announced that bench coach Ryan Christenson, who would have been interim manager if Melvin couldn’t have managed, entered COVID protocols.

Ian Happ drove in two runs for the Cubs, who handed rookie lefty MacKenzie Gore (2-1) his first loss. They took a 1-0 lead two batters in after Willson Contreras singled to right and scored on Suzuki’s double to left. Suzuki left the game in the middle of the sixth with a sore right ankle.

Gore allowed three runs and seven hits in five innings, struck out six and walked none.

The Padres remembered Hall of Famer Tony Gwynn on what would have been his 62nd birthday. His widow, Alicia, threw out the ceremonial first pitch to Tony Gwynn Jr., a former big leaguer and current Padres broadcaster. Anisha Gwynn, daughter of Alicia and Tony, sang the national anthem. The Padres announced the Tony Gwynn Community All-Star Program to recognize local youth who embody Gwynn’s dedication to local causes.

HARBAUGH IN THE HOUSE

Michigan football coach Jim Harbaugh, a friend of Padres manager Bob Melvin, watched from the first row behind home plate. Harbaugh played quarterback for the San Diego Chargers in 1999-2000 and coached the University of San Diego from 2004-06.

LHP Wade Miley is scheduled to make his Cubs debut on Tuesday night in the middle game of the series. He has been sidelined since spring training with left elbow inflammation. The Padres will counter with RHP Mike Clevinger (0-0, 5.79).