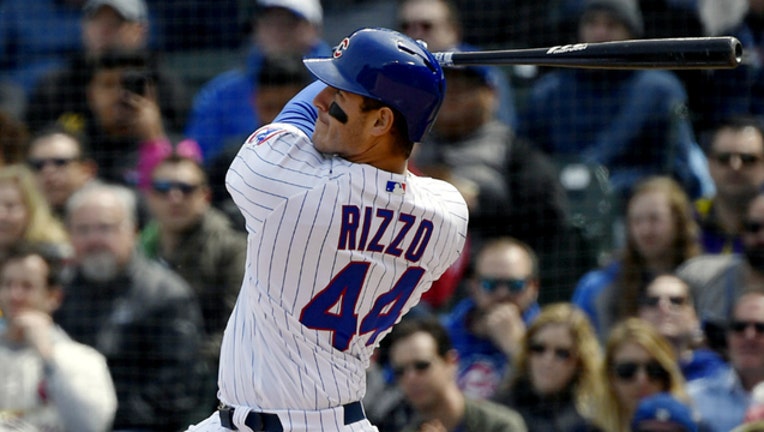 The second-place Cubs won their season-high fifth in a row while cutting St. Louis' lead to 1½ games. The Cardinals have back-to-back losses after five consecutive victories.

Hendricks (2-4) pitched his third career shutout and fourth complete game, his first since he shut out Miami on Aug. 1, 2016. The right-hander struck out three and did not walk a batter, after getting pounded in a loss at Arizona last week. Hendricks improved to 6-2 in 15 starts against St. Louis.

Rizzo made it 3-0 with a three-run drive against Jack Flaherty (3-2) in the third and finished with three hits. Javier Baez added an RBI single in the seventh, and the Cubs opened a 10-game homestand with a win.

Braves right-hander Kevin Gausman was ejected in the second inning for throwing a 97 mph fastball behind Ureña (1-5), who was at the center of a melee between the teams last season. Touki Toussaint (2-0), recalled from Triple-A Gwinnett, replaced Gausman and allowed one run in four innings with six strikeouts.

Gausman's first pitch to Ureña was knee-high behind the batter, and plate umpire Jeff Nelson immediately signaled the ejection.

The game was Ureña's first against the Braves since he was suspended for six games for intentionally hitting Atlanta's Ronald Acuña Jr. on the arm with a pitch last August, triggering a bench-clearing confrontation.

Already with 13 players on the injured list, the Yankees said Paxton will have an MRI on Saturday. The oft-injured Paxton, acquired from Seattle in an offseason trade to be a front-end starter, lasted only three innings on a nippy, 51-degree night.

Jonathan Holder (2-0) tossed two perfect innings before Adam Ottavino and Tommy Kahnle each worked a hitless inning. Aroldis Chapman got three outs for his sixth save.

Sanchez launched a 428-foot shot off Kyle Gibson (2-1) leading off the fifth and lined a laser to left field against birthday boy Mike Morin for his 10th home run in the seventh.

CINCINNATI (AP) - Stephen Vogt hit a tying homer in the ninth inning, Evan Longoria connected in the 11th and San Francisco rallied from an eight-run deficit for a victory over Cincinnati.

Down 8-0 after three innings, the Giants piled up three homers off the NL's top bullpen to pull it out and ruin top prospect Nick Senzel's debut for the Reds.

The Giants were down to their final out when Vogt connected off Raisel Iglesias for his first homer, tying it 11-11. Longoria led off the 11th with a homer just inside the left field foul pole off Jared Hughes (2-1), allowing San Francisco to get the better of a matchup between the NL's two worst offenses.

Reyes Moronta (1-2) escaped a threat in the 10th. Will Smith retired the side in the 11th for his eighth save in eight chances.

DENVER (AP) - Switch-hitting Ketel Marte homered from both sides of the plate for the third time this season and the Arizona Diamondbacks fended off Colorado's late rally.

Adam Jones had three hits, including a homer, and Eduardo Escobar also went deep for Arizona, which has extra-base hits in all 32 of its games this season. Robbie Ray (2-1) pitched into the sixth inning and allowed five runs - only one earned.

Nolan Arenado had three hits and Ryan McMahon hit a pinch homer for the Rockies. Charlie Blackmon added a two-run homer in the ninth off Andrew Chafin. Greg Holland relieved and the Rockies loaded the bases, but produced one more run on David Dahl's RBI fielder's choice. Holland struck out Ian Desmond and Chris Iannetta for his eighth save, stranding the tying and go-ahead runners, though his 15-game scoreless streak ended.

Marte, who had three hits and drove in four runs, homered from the right side off lefty Tyler Anderson (0-3) in the third and from the other side in the seventh off right-handed reliever Seunghwan Oh. It was the ninth time a Diamondbacks player homered from both sides of the plate in a single game - including the three this season by Marte. He also did it on April 5 against Boston and April 24 against Pittsburgh. Marte has accomplished the feat a franchise-record four times overall.

After Kurt Suzuki went deep off Seranthony Dominguez (3-0) to give the Nationals a 2-1 lead in the sixth, the Phillies rallied.

Jean Segura's infield single with one out chased Jeremy Hellickson. Lefty Dan Jennings (0-1) entered to face Bryce Harper, who drew a walk. Nationals manager Dave Martinez had a right-hander warming up in the bullpen but kept Jennings in to pitch to Hoskins. The cleanup hitter blasted a 1-1 pitch out to left to give Philadelphia a 4-2 lead.

CHICAGO (AP) - Chris Sale snapped out of his early season funk to earn his first win with an impressive performance against his former team, tossing six scoreless innings of three-hit ball in Boston's victory over Chicago.

Sale (1-5) entered with a 6.30 ERA through six starts but was dominant against Chicago in striking out a season-high 10. The left-hander retired seven of his first eight batters and didn't allow a hit until Yoan Moncada lined a sharp single with two outs in the fourth.

Rafael Devers launched a three-run homer deep to center off Reynaldo Lopez in the first inning. Michael Chavis added two-run shot to the top of the left field stands in the sixth as Boston won for the fourth time in its last five games.

Lopez (2-4) allowed six runs and eight hits through five-plus innings. In his previous start, the right-hander yielded only an unearned run and struck out a career-high 14 in six innings.

Naquin, batting for Jordan Luplow, grounded the first pitch from Anthony Swarzak (2-1) through the right side to score Leonys Martin from second base. Naquin was mobbed by teammates down the right field line after Cleveland's second walkoff win of the season.

The hit also provided some good news for the Indians, who placed pitcher Corey Kluber on the 10-day injured list before the game. Kluber broke his right arm after being hit by a line drive Wednesday and is out indefinitely. The Indians said Kluber does not need surgery for now and will be re-examined in three to four weeks.

Brad Hand (1-1) struck out two in the ninth to earn the win.

Braun had three hits to lift his average to .226, including his seventh home run of the season. Milwaukee played its fifth consecutive game without NL MVP Christian Yelich, who continues to deal with low back discomfort.

Woodruff (4-1) gave up six hits and one run in five innings to beat the Mets for the second time in a week. He walked two and struck out seven.

Josh Hader got six outs for his eighth save in eight tries. Hader allowed the first two batters in the ninth to reach before striking out the next three.

PITTSBURGH (AP) - Josh Phegley drove in a career-high eight runs to set a franchise record for most RBIs in a game by a catcher and Oakland snapped a six-game losing streak.

Phegley sandwiched a run-scoring single in the third between bases-clearing doubles in the second and fourth and added a long solo homer in the ninth. He finished 4 for 5 for the A's, who jumped on Joe Musgrove (1-3) early to win for just the fifth time in 18 tries away from O.Co Coliseum.

Matt Chapman added his ninth home run for Oakland and Kendry Morales went 3 for 4 as the A's set season highs in both runs and hits (16), and nearly matched their entire 15-run output during the six-game slide that dropped them to the bottom of the American League West.

Brett Anderson (4-2) allowed one run on four hits with two walks and four strikeouts to pick up his first win since April 9. Anderson even added a pair of singles at the plate for the first multihit game of his career.

BALTIMORE (AP) - Tyler Glasnow pitched seven innings of three-hit ball to earn his major league-leading sixth win, and Tampa Bay got a slump-breaking homer from Mike Zunino in a rout of Baltimore.

Glasnow (6-0) struck out eight, walked none and lowered his AL-best ERA to 1.47. It's been an impressive turnaround for the right-hander, who entered this season with a 4-16 lifetime record.

DETROIT (AP) - Matthew Boyd struck out nine in another solid outing, and Detroit scored three runs in the first inning.

It was the sixth straight quality start for Boyd (3-2), who allowed two runs and five hits in seven innings. He walked one. Shane Greene allowed a solo homer to Jorge Soler in the ninth, but he was able to close the game out for his American League-leading 13th save in 13 chances.

Jorge Lopez (0-3) settled down nicely after a tough first inning. He allowed four runs and five hits in seven innings.

ARLINGTON, Texas (AP) - Brandon Drury led off the 12th with a single and eventually scored the game's only run on pitcher Ariel Jurado's throwing error as the Toronto Blue Jays edged the Rangers.

Drury and Teoscar Hernandez had consecutive singles to start the 12th off the fifth Texas pitcher before Danny Jansen's sacrifice bunt hit right toward the mound. Jurado (0-1) fielded the ball and went for the lead runner, and Drury likely would have been out if not for the throw wide of third base that allowed him to instead go home.

Daniel Hudson (2-1) threw a scoreless 11th before Ken Giles struck out the side on 13 pitches in the 12th for his eighth save in nine chances. Six Toronto pitchers combined on a four-hitter for the team's first shutout this season.

SAN DIEGO (AP) - Austin Barnes hit a tying home run leading off the seventh and then scored the go-ahead run on Max Muncy's single with one out in the ninth to lift the NL West-leading Los Angeles Dodgers to the victory.

Muncy's hit off Kirby Yates (0-1) went off the edge of the glove of diving first baseman Eric Hosmer to bring in Barnes, who was aboard on a leadoff double.

Scott Alexander (2-1) got the final out of the eighth for the win. Kenley Jansen earned his 11th save by striking out the side after Hosmer reached on an error by shortstop Corey Seager.

The Padres took a 3-0 lead against Clayton Kershaw after three innings. Manny Machado hit a 437-foot, two-run homer in his first career plate appearance against Kershaw, and Ian Kinsler went deep off the left-hander leading off the third. It was the first game between the teams since Machado left the Dodgers as a free agent after helping them reach the World Series and signing a $300 million, 10-year contract with the Padres.