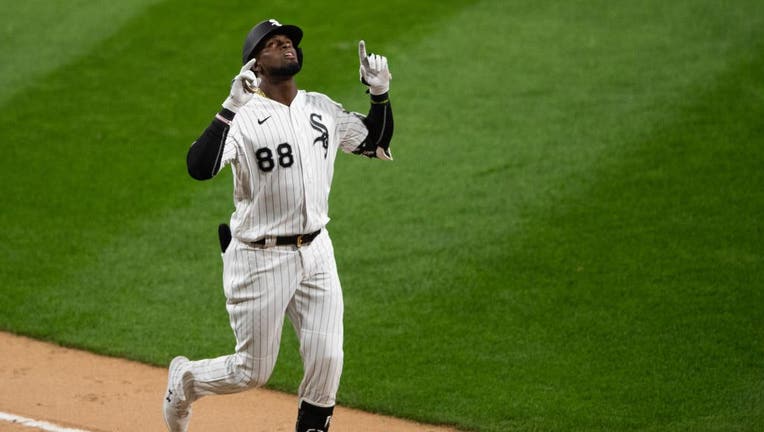 Chicago White Sox center fielder Luis Robert (88) celebrates after hitting a home run during the MLB game between the Chicago White Sox and the Detroit Tigers on August 17, 2020 at Guaranteed Rate Field (Photo by Zach Bolinger/Icon Sportswire via Get

CHICAGO - Tim Anderson hit two home runs, including his second leading off a game against Matthew Boyd in six days, and the Chicago White Sox coasted to a 7-2 victory over the Detroit Tigers on Monday night.

Yoan Moncada followed Anderson’s first shot with another long drive on the next pitch. That made Chicago the first team in major league history to open two games in one season with back-to-back home runs off the same pitcher, according to STATS.

Luis Robert also homered twice for Chicago (12-11), which launched six long balls in all and has 10 in the last two games. The White Sox won for the fourth time in six tries to move back over the .500 mark.

“(Offense) like that, I don’t think that anyone foresees it,” manager Rick Renteria said. “You see them happen, and you’re just as happy as everybody else is watching it occur. But I go back to simply, ‘Are we getting good pitches to hit?’”

Boyd (0-3) had vowed to be better after the White Sox handed him a 7-5 loss last Wednesday in Detroit. But it was more of the same for the Tigers starter, who gave up three runs on four hits and two walks in four innings.

“We have to get more than four innings out of our starters,” manager Ron Gardenhire said. “Right now, it’s get through the ballgame, and I hate playing baseball that way.”

In the second, Anderson hit an opposite-field home run for the fourth two-homer game of his career and first since May 26, 2018, at Detroit.

“Being able to foul off tough pitches, staying within myself in that at-bat,” Anderson said. ”(Boyd) left one up and I was able to take it out of the ballpark. Just the same as the second at-bat as well.”

Robert and Danny Mendick homered off reliever Rony Garcia in the sixth. Robert went deep again for the final runs, this time off Kyle Funkhouser after Edwin Encarnacion doubled in the eighth.

White Sox starter Gio Gonzalez allowed two runs on six hits and two walks in 4 2/3 innings but fell one out short of qualifying for his first win of the season. He struck out 10, the 15th time he reached double figures in his career.

“I’ll trade the 10 Ks up for seven innings right now,” Gonzalez said. “I’d do it in a heartbeat.”

While the White Sox are thinking seriously about the playoffs for the first time in years, the Tigers appear headed in a different direction.

Prior to their sixth consecutive loss, the Tigers (9-11) promoted right-handed pitcher Casey Mize, left-hander Tarik Skubal and infielder Isaac Paredes, an indication that player development will become an even bigger priority in the shortened 60-game season. All three are on the short list of top prospects in the organization.

In his major league debut, Peredes, 21, had a two-run single in the fourth in four at-bats. Mize and Skubal are scheduled to make their debuts in the four-game series.

White Sox OF Adam Engel was placed on the COVID-19 injured list as a precaution. The veteran reserve has not tested positive and is without symptoms, but he might have been in contact with a non-baseball person who has the virus.

“He is being isolated and will return once futher testing is complete,” general manager Rick Hahn said. “The experts have all determined there is fortunately no additional risk to anyone associated with the club at this time.”

OF Luis González was activated from the Schaumburg training site.

The 23-year-old Skubal will make his first big league appearance Tuesday night, and Mize is slated to follow Wednesday night. Mize, also 23, was the No. 1 pick in the 2018 amateur draft.

“It was more important for us that these guys got more work (in the minors) before we rushed them in there,” general manager Al Avila said. “We felt they were ready.”

Tigers: INF Niko Goodrum will be idle for a few days because of right back tightness that forced an early exit Sunday. Willi Castro made the start at shortstop, while Paredes played third base.

White Sox: C Yasmani Grandel left the game with lower back stiffness in the sixth inning. He is day-to-day. ... RHP Reynaldo Lopez (right shoulder soreness) could return by the end of the month.