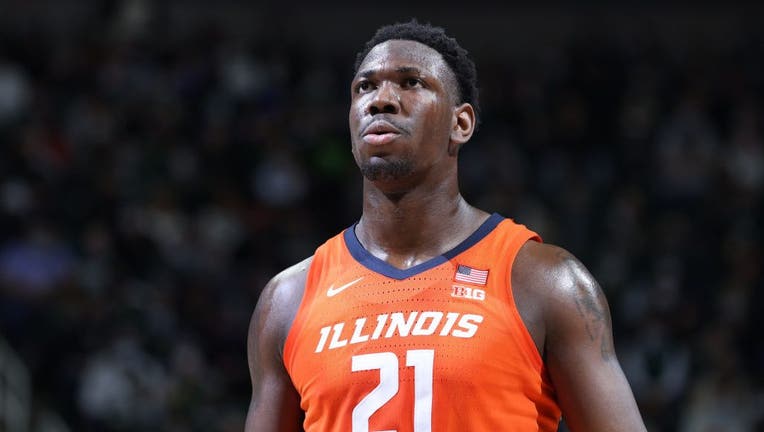 EAST LANSING, MI - FEBRUARY 19: Kofi Cockburn #21 of the Illinois Fighting Illini shoots a free throw in the second half of the game against the Michigan State Spartans at Breslin Center on February 19, 2022 in East Lansing, Michigan. (Photo by Rey D

CHAMPAIGN, Ill. - Illinois All-America center Kofi Cockburn has declared for the NBA draft and hired an agent, marking the end of one of the most productive careers in program history.

Cockburn made the announcement on his social media channels Wednesday, and the Illinois athletic department confirmed it.

"To play in the NBA has been a longtime dream of mine and I truly think it’s time for me to take that next step," Cockburn wrote.

The 7-foot Jamaican was an Associated Press All-America first-team pick this past season and will leave Illinois as the school’s scoring and rebounding leader among three-year players and the record holder for double-doubles.

"This journey has been a very special one," Cockburn wrote. "Never did I imagine being part of something so fun and extraordinary. So many people to thank but I don’t know where to start, so many wonderful memories and bonds that I will cherish for a lifetime."

Cockburn was the only player in the nation to average at least 20 points and 10 rebounds last season and only player to rank in the top 20 in both categories. He had 17 double-doubles despite missing five games and he finished his career with 45, second most in the nation over the last three years. His 1,546 points and 861 rebounds are most among three-year players at Illinois.

Cockburn also entered the draft pool in 2020 and 2021 but withdrew both times.

"We wish Kofi the best as he prepares for his NBA career," Illinois coach Brad Underwood said. "He leaves as the greatest center in Illini history, which is evident by his many accolades. But above those individual awards, it was his impact on winning that will leave a legacy. We’ll always be grateful to Kofi for what he’s meant to our program and know he has a bright future ahead."