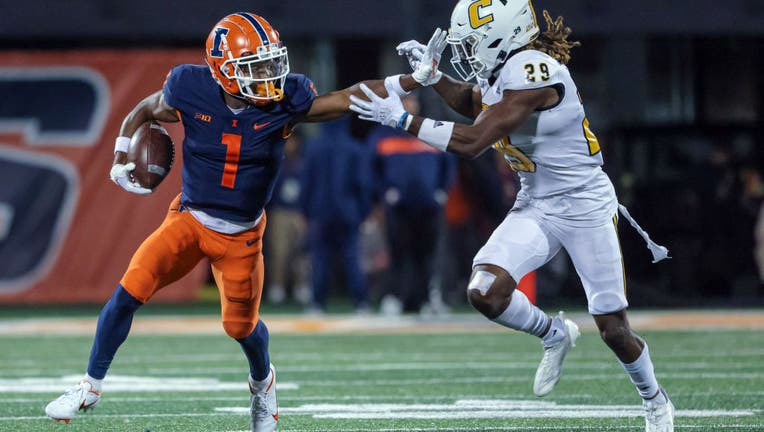 Isaiah Williams #1 of the Illinois Fighting Illini runs the ball against Telly Plummer #29 of the Chattanooga Mocs during the second half at Memorial Stadium on September 22, 2022 in Champaign, Illinois. (Photo by Michael Hickey/Getty Images)

CHICAGO - Chase Brown became the first Illinois running back to rush for 100-plus yards in five straight games, Tommy DeVito passed for 329 yards and three touchdowns and the Fighting Illini blanked Chattanooga 31-0 on Thursday night.

Brown capped a five-play, 64-yard scoring drive with a 9-yard touchdown run after the defense forced Chattanooga (3-1) into a three-and-out on its first drive.

He finished with 108 rushing yards on 20 carries and currently leads all FBS rushers with 604 yards through four games.

The closest the Mocs came to scoring came early in the second quarter when they drove to the Illinois 16-yard line. Jartavius Martin picked off a Preston Hutchinson pass in the end zone to end the Mocs’ threat.

The Illini recorded their first shutout since a 2015 win over Western Illinois.

Hutchinson was sacked four times and completed just 6 of 18 passes for 49 yards with two interceptions.

DeVito became the first Illinois quarterback to pass for more than 300 yards in a game since Brandon Peters threw for 369 yards at Michigan State in 2019.

Ailym Ford rattled off runs of 39 and 32 yards for the Mocs’ biggest gains of the night. He finished with 93 yards on 17 carries.

Caleb Griffin kicked a 34-yard field goal to put Illinois up 10-0 in the first quarter.

Illinois: The Illini prepared well for a better-than-usual FCS opponent and dominated accordingly to set themselves up in good position to make a bowl appearance with two-thirds of the schedule left. Illinois is a step or two away from contending in a wide-open Big Ten West thanks to stellar defense and a much improved passing attack with new offensive coordinator Barry Lunney Jr. making the calls.

Chattanooga: The Mocs can chalk this one up to talent differential and short rest after a strong start to their campaign. Rusty Wright’s group could be in the mix for the Southern Conference title in November.

Illinois: Bret Bielema returns to his old stamping grounds when the Illini play at Wisconsin on Oct. 1.